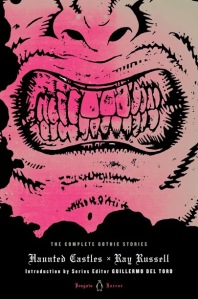 I gave up on Stephen King’s The Shining.

I was terrified by Shirley Jackson’s The Haunting of Hill House.

They may be good horror genre books, but in general I prefer novels without ghosts or psychics.

Intrigued by the new Penguin series of the best in classic horror, however, I picked up a copy of Ray Russell’s Haunted Castles:  The Complete Gothic Stories, a collection of engrossing, but stylistically unexceptional tales.

In “Sardonicus,” the narrator-doctor, Sir Robert Cargrave, visits his former girlfriend, Maude Randall, and her husband, Mr. Sardonicus, at their castle in Bohemia.

He is one of those precise, detached scientific narrators we know from the tales of Poe and Le Fanu.  He accepts their invitation somewhat reluctantly and says amusingly of travel:

I am not–as my friend Harry Stanton is–fond of travel for its own sake.  Harry has often chided me on this point, calling me a dry-as-dust academician and ‘an incorrigible Londoner,’ which I suppose I am.  For, in point of fact, few things are more tiresome to me than ships and trains and carriages; and…the tedium of travel itself has often made me think twice before going out on a long voyage.”

He discovers that Maude is terrified of her husband, and when he meets Mr. Sardonicus, sees that the man’s lips are pulled back horrifically in “a mirthless smile.”  Mr. Sardonicus asks Sir Robert to operate on his face, though that operation has not, as it were, been approved by doctors.  It cannot end well…

The other tales are equally gloomy.  In “Sagitarrius,” an actor turns out to be demonic.  In “Sanguinarius,” a happy wife learns that her husband and her new female lover are not what they seem to be. In “The Runaway Lovers,” two lovers are put in a dungeon and horrified beyond imagination.

There is a repellent, sadistic turn to these tales, as with so many other horror tales.

But I will certainly never read anything by Ray Russell again.

AND NOW ON TO PROUST.

For a long time I went to bed early.  Sometimes, my candle scarcely out, my eyes would close so quickly that I did not have time to say to myself, ‘I’m falling asleep.’

Yes, that is Lydia Davis’s translation of the beginning of Proust’s Swann’s Way, which I persuaded my husband to buy, because I deserve the latest translation.  I will begin Swann’s Way in November, the centennial of its publication, and  I plan to read all of Proust’s In Search of Lost Time in the next year.

Marcelle Clements, author of the excellent novel Midsummer, says in her article, “How to Read In Search of Lost Time” at Oprah.com, that we should read it quickly.

…here is the secret: Read fast. Read for plot—though you won’t understand what the plot is until the end. Don’t be frightened by the size of the novel. Critics scare readers off by talking of it as a cathedral.

Wouldn’t that be great?  Stay inside for hours…read…no distractions…get that app, “Freedom,” that keeps you off the internet.

But that is not going to happen.

It should take me at least a month to read Swann’s Way.  And then I’ll read something else, and then go back to In the Shadow of Young Girls in Flower.

DO YOU ENJOY MARILYN FRENCH?  Open Road Media has reissued four of Marilyn French’s novels and one memoir as e-books:  Her Mother’s Daughter, A Season in Hell (a memoir), My Summer with George, The Bleeding Heart, and Our Father.

French is best known for The Women’s Room, a best-selling feminist novel, which I read many years ago.  How nice that her other books are available.

I plan to read Her Mother’s Daughter while I roast the turkey on Thanksgiving:   I always read a family saga or other pop book on Thanksgiving.   One year I read Edna Ferber’s Giant. You get the picture.

If you’ve read and enjoyed anything by Marilyn French, let me know.