Last week I had a Mary Wesley marathon.  I reread four of her witty, whimsical, often darkly comic novels. 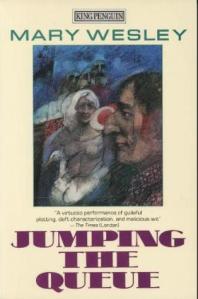 As I mentioned, Wesley’s first novel Jumping the Queue was published in 1983 when she was 71.  She became an overnight sensation, a respected novelist whose work is reminiscent of the books of Elizabeth Jane Howard , Alice Thomas Ellis, and Barbara Pym.

Jumping the Queue is a rich, dark comedy that could not be possibly be categorized only as women’s fiction.

The heroine, Matilda/Mattie Poliport, a suicidal widow and mother of three neglectful adult children, rescues the suicidal Hugh, known in the press as the Matricide. (The alliteration of Mattie and Matricide is not coincidental.)  Matilda has planned her suicide precisely:  after a final picnic and pills, she intends to swim out to sea. Prevented by a group of young people who gather near her rock, she roams the town and finds Hugh getting ready to  jump off the bridge.  She is old enough to be his mother, as she says,, but she also pretends to make out with him so a slow-cruising police car won’t recognize the Matricide from his picture in the papers.

And no wonder:  Matilda’s husband, Tom,  had a long, incestuous affair with their daughter, Louise, which she carefully ignored. She thinks there are worse things than incest and matricide.  She says she, too, has murdered someone.

As we learn more about Matilda’s past, there is a sense of menace.  A few of the characters she knows are sinister, especially one old friend who briefly muses that he might have to stage her heart attack.  (Thank God she doesn’t know too much.)    Her  dog and cat are dead, and she only has her goose, Gus, the Matricide,  a stray dog they pick up, Folly, and a neighbor who is in love with her.  Everyone recognizes the Matricide, but no one wants to turn him in.  There are so many twists near the end of the novel that I won’t reveal them, but they are utterly logical.

By the way, her books are in print as e-books, and you can also find used copies at Amazon, Abebooks, etc.

Mocking the BOOK REVIEW PUBLICATIONS.  Much as I enjoy book reviews, I  am often flippant about the critics. After the recent debacle of Ayelet Waldman’s complaints on Twitter about not making the Notable 100 Books at the New York Times, I thought how very silly it is to give the book pages so much power.  I probably find at least half of my books browsing at bookstores , and read the reviews later.  The reviews may or may not be good, but my motto is Caveat Emptor.  The death of the book review pages WILL be the end of civilization, but meanwhile we can browse.

And so I have created mocking nicknames for some of the publications I read.

BOP:  The Boys’ Own Paper.  Though The Washington Post Book World is one of the best  review publications in the U.S,  it is very male-oriented, and the tenure of the three in-house male critics has seemed very old-fashioned indeed.  Though I’ll miss the great Jonathan Yardley, who  is retiring at 75, this is an opportunity for a female critic to step up.

GOP.  The Girls’ Own Paper.  The New York Times Book Review, now edited by Pamela Paul, is  the most equitable book review publication in the U.S., reviewing numerous women’s books and hiring many women reviewers.  I was exhilarated one week when  almost all of the books reviewed were written by women and reviewed by women.  What validation:  Is that how men feel all the time? But women are under a lot of pressure to succeed, and I think pop books like Jennifer Weiner’s should still be barred from The New York Times Book Review.  .A short review of Weiner’s latest book was sneaked into an article with several short reviews.  Couldn’t the space have  been better used for small-press books or university-press books?

SNOP.  The Snobzzz’ Own Paper.  The New York Review of Books is zzzzzzzzzzzz…snobbish and intellectual, very male-oriented, but…did I just fall alseep ?   zzzzzzzzzzz.

FREQ-COP:  The Frequently Controversial Paper.  The Guardian has one of  the best and largest book pages, and is  well-known for its controversial, liberal slant on literary matters.  The creative essays are original and fun to read, the lists of oddball books are entertaining, and  I very much enjoy the columns on paperbacks, science fiction, and the book clubs.  My one criticism is that the book news is frequently rehashed from  other newspapers, with remarkably little original reporting.   Let’s get out of the tabloid mentality and send those writers into the field!