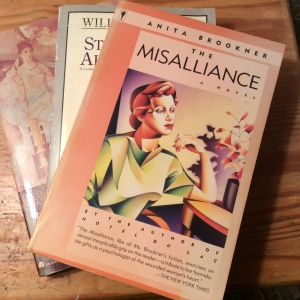 I have a lot of books.  So do you, or you wouldn’t be here.  The volumes on my shelves range from Louisa May Alcott’s Little Women to Zola’s The Ladies’ Paradise, from Apuleius’s The Golden Ass to Xenophon’s Anabasis, from science fiction titles at Small Beer Press to  Viragos.

This year I have cut my subscriptions to several book review publications.  Why?  It’s a matter of budget, and it’s a matter of what I need.  Perusing my book journal has taught me that the books I read usually (a) predate this century, (b)  are in the canon, or are neglected classics, and  (c)  have not been recently reviewed.  I do not really need The New York Review of Books, the TLS, or the LRB cluttering up my house.  I have time to read two articles per issue, if that.   We get The New York Times once a week now.  That’s enough.

Most books I’ve read this year were already on my shelves, but there are ten exceptions.  Book news on the internet was often the impetus rather than reviews.

The internet has raised many questions about traditional publication. Online resources really are cutting my need to subscribe to review publications. Many newspaper book pages are now free on the internet, or at least the first 10 articles are free each month.  Perhaps this is a mistake: I do not know how free articles benefit the publications at all.  Newspapers are closing down all over the country and the employees must be frantic.  I think that is why critics are so elegaic about their careers.  They do not see a future for criticism.  I’m not Cassandra, so I do not know the answers.  It is frightening to see our world change in just a few short decades.

Then there are blogs.  Dovegreyreader has rocked the world of English publishers by selling books worldwide when she is enthusiastic.  How many readers does she have?  Ten thousand a day, I read some years ago?  I love her writer’s voice, but do not often share her taste, so the reading of the blog does not translate into buying theb ook.  I do read the enthusiastic blogs on my blogroll (well, the ones that are not shut down), but  I have difficulty finding out about new ones.  The bloggers I read do not read the newest books:  they read classics, reprints of neglected books, or well-written books by women.  They set aside weeks for reading Virginia Woolf or Hermann Hesse:  very laudable!  Currently the blogger Kaggsysbookishramblings is rereading Dorothy Richardson’s Pilgrimage, and Ellen Moody has recently written on Trollope’s Orley Farm.

And so here we are in the second decade of the twenty-first century, wondering what the fallout will be from my personal decision to cancel some subscriptions.  I hope there will be none.  I hope the internet will be a friendly place for critics and bloggers to co-exist.

12 thoughts on “Do We Need Book Reviews?”