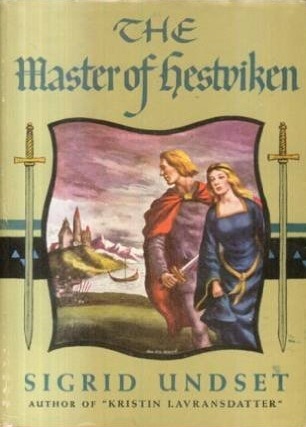 We were at the Waffle House when an artist friend recommended Sigrid Undset, a Norwegian writer who won the Nobel for Literature. Between teaching and studies I had little leisure in graduate school, and I laughingly wondered if Undset (1882-1949) might be too modern for a reader who spent her days with the Presocratics, Cicero, and Bradley’s Arnold.  He teased me because I was a fiction junkie who crawled into bed every night at eight with Dickens or Mrs. Gaskell.  He thought I needed to venture beyond the nineteenth century in my reading.  He was a wild artist. 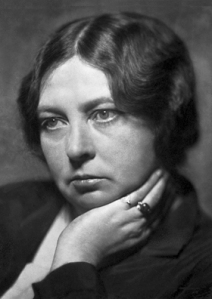 Summer came, and I was free, if exhausted.  Bleary-eyed and insomniac, I found a copy of Undset’s trilogy, Kristin Lavransdatter, at a used bookstore.  I  felt a special bond with Kristin, a brilliant and practical but troubled Catholic heroine in the Middle Ages.  These gorgeously-written novels, The Bridal Wreath, The Mistress of Husaby, and The Cross, published in the 1920s, chronicle Kristin’s life from childhood through old age.  Kristin’s difficulties with many different kinds of love (filial, marital, maternal, religious) resonate with so many of us.  In 1928 Undset won the Nobel Prize for literature, “principally for her powerful descriptions of Northern life during the Middle Ages,” says the Nobel Prize website.

After a recent rereading of Kristin, I wanted to go back immediately and start it again.  But I decided instead to reread Undset’s tetralogy, The Master of Hestviken, also set in medieval Norway.  It is stunning, though its characters are less sympathetic.

Originally published between 1925 and 1927, it follows the fortunes of Olav Audunsson and Ingunn Steinfinssdatter.  In The Axe, the first volume, they are betrothed as children at a banquet.  But the loves and crimes of Ingunn’s parents, Steinfinn and Ingebjorg, rock the future for the next generation and threaten to obstruct the marriage. The entire family is living in a kind of Golden Age paradise and blissfully ignorant of what lies in store for them.  Ingunn, a tomboy, plays outdoors with her brothers and Olav (Stienfinn’s foster son) while her lovely younger sister prefers the duties and pursuits of women.

Then violence interrupts their idyll.  Year ago, when Steinfinn fell in love with Ingebjorg, she was already betrothed to Mattias.  When Ingebjorg’s father rejects  Steinfinn’s suit because of this betrothal, Steinfinn  didn’t take the rejection seriously and the next year “abducted” the willing Ingjborg.  The two lived as if married, but could not legally marry, even though they had children.   When Ingbjorg was pregnant with her third child, the Queen intervened so the couple could marry..  But seven years later, Mattias, the man  originally betrothed to Ingebjorg, invaded their house with an armed band of man and took his revenge, tying up naked Steinfinn and holding Ingebjorg on his lap.  He stops just short of rape.

As you can imagine, violence brings more violence.  Steinfinn eventually takes revenge, and before his death there is a question of whether the children  are really betrothed: Steinfinns suggests it was a joke as a party.  But Olav and Ingunn are already lovers and feel quite desperate.  They consult the bishop, who is on their side, but then hot-headed Olav kills a man in the bishop’s house and is exiled.  Later the bishop is exiled.  Then Ingunn is sent to live with her aunt and spends her days caring for her beloved grandmother, who has Alzheimer’s.  But this is no life for her, and she simply spends years waiting for Olav.  Everyone agrees that he will returne once he is absolved, and then they will be married . 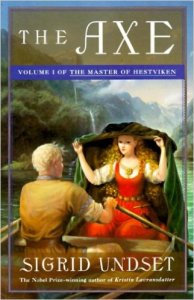 Neither character is as likable as Kristin Lavransdatter or her noble slacker husband Erlend, but I do feel a special sympathy for Ingunn.  Here is a young woman with nothing to do, who lacks the talents and skills of Kristin.  She spends her days dreamily sewing and fantasizing about weddings and imagining being a mother of many children.  Finally her aunt takes her to a wedding.

At the great wedding she had been made to wear bright-colored clothes, a silver belt, and floating hair. At the time she had only been shy and confused.  But it left its mark in her.  When she was back in her grandmother’s room at Berg, new images floated before her mind–she saw herself walking with Olav, jewelled and glorious–it might be in the palace of some foreign king; this seemed to compensate for all these years she had sat in the corner.

Poor Ingunn!  She is completely, tragically powerless, a woman who needs to be married to fulfill herself.  Not at all like Kristin, but then few are.  She  flirts with a young scribe she met at a wedding.  Then he date-rapes her and she is broken.  Her pregnancy changes her relationship with Olaf, who is a decent man, but there is a double standard here.    This is a feminist novel:  Undset portrays the tragedy of a woman who has few rights and no control over her future.

4 thoughts on “Sigrid Undset’s The Axe, the First Volume of The Master of Hestviken”