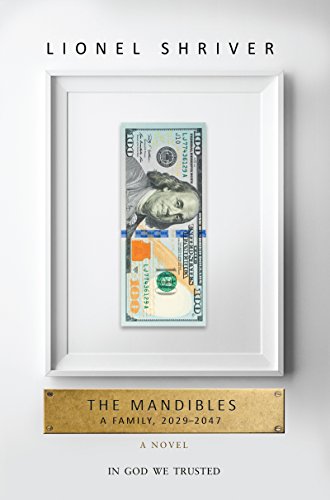 Don’t use clean water to wash your hands!”–Florence Mandible in Lionel Shriver’s The Mandibles

But will we always have water?  In Lionel Shriver’s clever, witty dystopian novel, The Mandibles:  A Family, 2029-2047, water is a luxury. There is no water in the West and there is a shortage in New York.

Shriver writes about four generations of the Mandible family.  The Mandibles have always been rich:  their fortune was built, ironically, on diesel engines (obviously a contributing factor to the pollution in 2029).  But this book is really about money:  what happens when the economy tanks in 2029 after the dollar is declared worthless in the global economy?    The U.S. has already survived “the Stonage,” when the internet was knocked out, the only real source of communication since people stopped reading print books and newspapers.  (The internet’s back.)  The Mandibles assumed there would always be money, and that they would inherit when  99-year-old Douglas Mandible, a former literary agent, died.

My favorite character, Florence Mandible, has a “moronic double major in American Studies and Environmental Policy” and barely makes a living at her job at a shelter.  But she is good at managing water at her house in Flatbush for her partner, Esteban, and her son, Willing.  When Willing wants to take a shower, Florence thinks,

Her thirteen-year-old had bathed only five days ago, and knew full well they were all allotted one shower per week (they went through cases of comb-in dry shampoo).  Willing complained, too, that standing under their ultra-conservation shower was like “going for a walk in the fog.” True, the fine spray made it tricky to get conditioner out, but then the answer wasn’t to use more water.  It was to stop using conditioner.

The other Mandibles are fascinating though less likable:  Florence’s  therapist sister, Avery, can barely deny herself gourmet food even when her dinner guests can’t afford smoked salmon and fine wine, and her husband, an economist/professor, is a twit who tries to play by the old rules of the economy and loses all their money.  (And they have spoiled children who can’t believe they can no longer attend Sidwell Friends School.)  Florence and Avery’s father, Carter, a former journalist, must take in his father,  Douglas, and his younger wife, who has Alzehimer’s, after they are evicted from their palatial home in an assisted living/nursing home compound.   (Carter won’t let Douglas take his rare books.  He says impatiently that Douglas can download books.)

Information about money is presented in dialogue, and perhaps there are too many details. Like Florence, I’ve always found money “drear.”  But Shriver makes it simple, and if you read science fiction, you’re used to lots of complicated background that makes the future world believable.

I’m only one third of the way through it, and it’s entertaining. 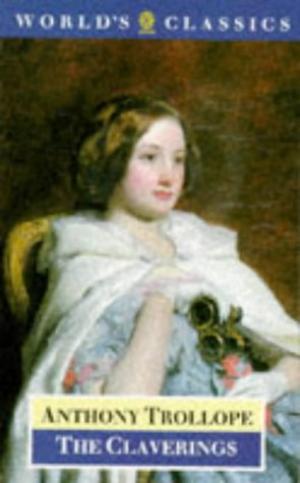 AND NOW FOR TROLLOPE’S THE CLAVERINGS.   Trollope is a remarkable writer, one of the most consistent of all the Victorian writers.  He wrote 47 novels: perhaps that’s why he is underrated, as everyone says, though it does seem to me that every blogger reads Trollope.  The Claverings is not well-known, but it is very good indeed. And, according to the introduction to the Dover edition, the biographer Michael Sadlier called it one of Trollope’s three “faultless books,” the other two being Doctor Thorne and Harry Hotspur of Humblethwaite.

The Claverings revolves around love and marriage: a typically Victorian plot, but imaginatively and originally treated. The hero, Harry Clavering, the son of the rector at Clavering, is in love with Julia Brabazon, a wicked, witty woman who is honest about her mercenary nature.  She jilts Harry and marries Lord Onger, a rich, dissipated, drunken man who looks 20 years older than his age (36).   Harry’s cousin, Hugh Clavering, a baronet, is Julia’s brother-in-law, and introduces her to Lord Onger.  He very cynically doesn’t care what happens to Julia.

Harry is inconsolable–for a while.  But he apprentices himself for a year to an engineer/surveyor,  Mr. Burton, and falls in love with and proposes to Burton’s daughter Florence, who is smart, likable, and ladylike. I like Florence, but she is only sketched (or so it seems so far) and Julia is clearly Trollope’s favorite. ( I must confess, she is my favorite, too.

After Lord Onger dies, Julia comes back to England.  And guess who falls in love with Julia again?

What I like about this is that Trollope doesn’t idealize Harry.  In London, away from Florence, Harry is weak and prefers Julia.  He is not heroic.

He longed to go again to Bolton Street, but he did not even do that.  If there, he could act only as though Florence had been deserted for ever;–and if he so acted he would be infamous for life.  And yet he had sworn to Julia that such was his intention.  He hardly dared to ask himself which of the two he loved.  The misery of it all had become so heavy upon him that he could take no pleasure in the thought of his love.  I must always be all regret, all sorrow, and all remorse.

No spoilers here, because frankly I don’t know what happens.  Will it end conventionally?  Well, probably.  But in the meantime I am glued to it.