What We Bought in Omaha!

We live in a small, beautiful city on the prairie.  Nobody knows it’s here; nobody understands why we live here. It’s not glam, but it’s Paradise in the summer, and  has livable urban neighborhoods near shops, almost no traffic, and everything you need to be a well-adjusted 21st-century American.   A woman who moved here from California observed  in line at Starbucks,  “I can live anywhere there’s a Starbucks and Target!”

But we do lack bookstores, except for B&N, so today we headed to Omaha, the nearest big city, to browse at Jackson Street Booksellers, a huge used bookstore, and The Bookworm.

First up:  I found an  irresistible Library of America volume with three of William Dean Howells’ novels, The Minister’s Charge, April Hopes, and Annie Kilburn.  Have you heard of these?  We have not, but I love Howells! 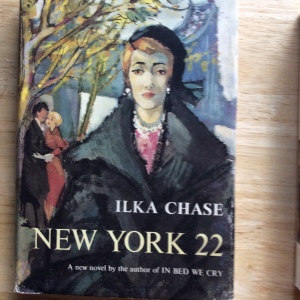 And now for ’50s pop!  I could not resist this cover.  According to Kirkus, Ilka Chase’s 1951 novel New York 22 is “a chaise longue coverage of marital friction, feminine calculation and upper bracket racketing, this should have good rentals on the distaff side; and substantial sales to the gilded glamor fringe.”

There is very little about Chase online.   The daughter of Edna Woolman Chase, the editor of Vogue from 1914-1952, Ilka was a member of the Smart Set and an actress who starred in many Broadway plays, including the original Broadway version of The Women.  Ilka adapted her novel In Bed We Cry, the story of a self-made career woman in the cosmetics business.  And she had  her own  TV show called Fashion Magic!

I’ll be happy if this novel is readable in the style of a trashy pageturner like Faith Baldwin’s Skyscraper or Susann’s  Valley of the Dolls (a truly great trash classic!).  There’s hope:  The characters are drinking cocktails, and the heroine, Georgiana, leaves her husband and daughter  to chase a writer who is 12 years younger than she.

Here’s a quote chosen at random:

Georgiana sat in her office at Tang, her desk spread with manuscripts and correspondence waiting her attention, but she ignored them.  She was engrossed in reading the first review of Reams’s book, The Shadowed Path.  Reams had sailed according to schedule, but Barnstable had published it that week and Georgiana read the clippings with a sense of triumph and a sinking heart.  As she had expected, Reams was accepted into high company.  Thomas Wolfe,Hemingway, Faulkner, in reference and comparison–the great names dotted the columns.

I may save this for Thanksgiving:  I like to read old pop novels while the turkey is roasting.

Next up:  Maurice Baring’s C (1924).  I’ve never heard of it, but I do love a good novel about Edwardian house parties.  Goodreads says, “Baring’s homage to a decadent and carefree Edwardian age depicts a society as yet untainted by the traumas and complexities of twentieth-century living. With wit and subtlety a happy picture is drawn of family life, house parties in the country and a leisured existence clouded only by the rumblings of the Boer War. Against this spectacle Caryl Bramsley (the C of the title) is presented – a young man of terrific promise but scant achievement, whose tragic-comic tale offsets the privileged milieu.”

Last but not least,  Tama Janowitz’s A Certain Age.  I loved Janowitz’s new memoir, Scream (which I wrote about here), and look forward to reading this  modern retelling of Edith Wharton’s The Age of Innocence. 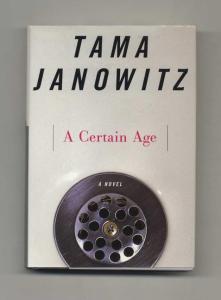 I bought nothing at the Bookworm today, because I had exceeded my limit at Jackson Street Booksellers.

And, by the way, here’s the sky  snapped from the car as we tooled down the highway:

10 thoughts on “Going to Omaha for the Books!”