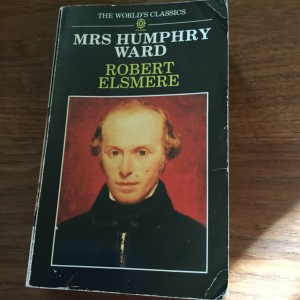 …the afternoon sun, about to descend before very long behind the hills dividing Long Whindale from Shanmoor, was still lingering on this May afternoon we are describing, bringing out the whitewashed porch and the broad bands of white edging the windows, into relief against the gray stone of the main fabric, the gray roof overhanging it, and the group of sycamores and Scotch firs which protected it from the cold east and north.”–A lovely descriptive passage from Mrs. Humphry Ward’s Robert Elsmere

I was raised on Jane Austen, Charlotte Bronte, and Thomas Hardy, and cannot get enough of Dickens.

In recent years, after reading and rereading my favorite nineteenth-century classics,  I have turned to the “third-rate” Victorians.  Call them minor, but they are better writers than your average 21st-century computerized pisseur de copie. Mrs. Humphry Ward, the author of 25 novels,  is intellectually and stylistically in the same class as George Meredith, Mrs. Gaskell, and Mrs. Oliphant.   I recently read  and loved  Robert Elsmere, Ward’s most famous novel.

Yes, it is a religious novel, but don’t be put off:  the characters are vivid and surprising, love and marriage don’t always work out, and the plot doesn’t go where you think it will.  At the center is Robert Elsmere, an inspired but delicate clergyman whose body  breaks down when he works too hard.  He tells stories and lectures on history to the poor, nurses the sick with the help of his wife, and insists on the importance of good drains.  But his contact with an intellectual atheist changes his  own beliefs. 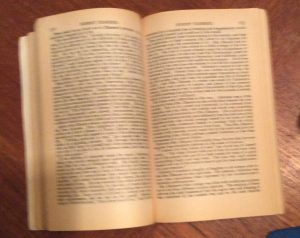 The print is small….

Women play a big role in this 1888 novel and are more sympathetic than the men.  My favorite characters are the Leyburn sisters, who really dominate the book:  Catherine, who marries Robert, a very bright and diligent but rigid woman whose vicar father entrusted to her the religious care of her mother and sisters before his death; Agnes, a smart, witty, tactful spinster who unfortunately drops out of the narrative far too soon; and the youngest, Rose, a wild, beautiful, talented pianist who worries Catherine with her penchant for the arts. Although there is much intellectual discussion of church history, Christianity, and atheism  (see the introduction!),  there is also plenty about love, art, and the value of social work.  What I love most:   the way Ward creates an atmosphere.  I love her country walks, idyllic woods and pastures, and later the ugly smoky vividness of 19th century London.

Alas,  the print in my out-of-print Oxford World’s Classic edition, which was large enough when I first tried to read it pre-bifocals, is now too small for me.  There is almost no space between the lines. I was exasperated.   I read much of it on an e-reader.  Do your eyes ache after hours on an e-reader? Mine do.

Old books last, but some of mine have seen better days. 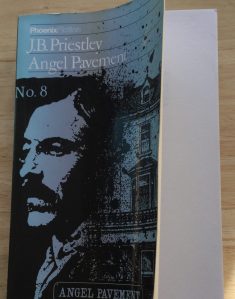 J. B. Priestley’s Angel Pavement is a charming, lively novel,  but after one read my used paperback copy began to curl.  There is nothing wrong with it, but why do covers curl?   I loved the book, the story of a group of sad, desperate people who work in an office, Twigg & Dersingham.  (I wrote about it in 2014 here.) 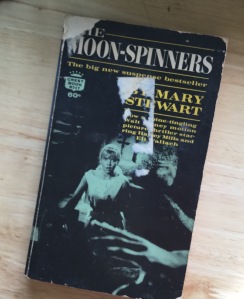 Chewed by a cat.

The Moon-Spinners is my favorite book by Mary Stewart, though this 1964 paperback is  bunged-up.  My cat ate a corner of the cover,  but I love the photo of Hayley Mills in what the blurb calls the “spine-tingling Walt Disney motion picture.” 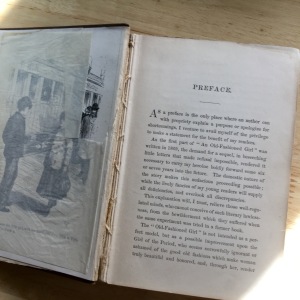 This has seen better days.

The binding of this nineteenth-century edition of An Old-Fashioned Girl, my favorite book by Louisa May Alcott, is falling to pieces.  Thank God paperbacks are cheap and e-books are free. 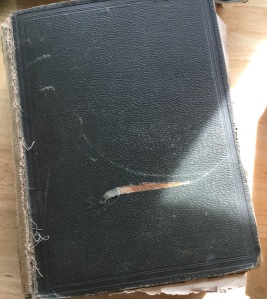 The cover of this scholarly nineteenth-century Greek dictionary, bought for $29 when I was in school, is turning from a book into wood and dust.  Just look at that cover.   The pages are still readable, though. 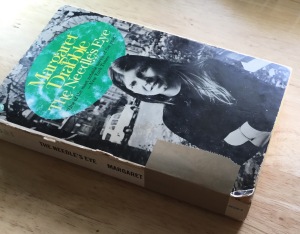 Held together with tape.

The Needle’s Eye is my favorite novel by Margaret Drabble.  My paperback is held together with tape.  I love the picture of Drabble on the cover!

Have your books suffered from small print, curled covers, etc.?  We can’t replace our books!

13 thoughts on “When Print Is Too Small: Mrs. Humphry Ward’s Robert Elsmere & Others”