“For unless I had convinced myself from my earliest years, on the basis of lessons derived from all I had read, that nothing in life is really worth having except moral decency and reputable behaviour, and that for their sake all physical tortures and all perils of death and banishment must be held of little account, I should never have been able to speak up for the safety of you all in so many arduous clashes, or to endure these attacks which dissolute rogues launch against me every day.”
—”Pro Archia,”  from Selected Political Speeches by Cicero (Penguin)

It has not been the happiest of spring breaks. Spring turned into winter, and we didn’t get out much.  Oh, well, I had the opportunity during the cold snap to reread Cicero’s Pro Archia and Anthony Trollope’s The Way We Live Now.

And here’s a bracing discovery.  Everything I read, from Cicero’s defense of a Greek poet’s Roman citizenship to Trollope’s satirical novel The Way We Live Now, applies to the political situation.  Naturally, the disgraceful political events in Washington D.C., if indeed our nation’s capital is still there and not at the Mar-a-Lago resort in Palm Beach, are at the back of our minds.  It’s not exactly comforting, but it’s obviously true that such struggles are centuries old.

I know that many of you have read The Way We Live Now by Anthony Trollope, and indeed I wrote a short post about it in 2014.  According to the introduction of the Oxford edition by John Sutherland, Trollope wrote this superb satire in reaction to the dishonesty and corruption he observed in London when he returned after a year and a half in “the colonies.”

Trollope’s delineation of the  relationship between financial scams and politics is still very pertinent. The villain, Mr. Melmotte, a financier, floats a fraudulent railway company by selling shares for a nonexistent enterprise, and not only grows richer but buys his way into Parliament.  And Trollope’s characterization of Mr. Melmotte applies to more than one politician these days.

He knew nothing of any one political question which had vexed England for the last half century,—nothing whatever of the political history which had made England what it was at the beginning of that half century … He had probably never read a book in his life. He knew nothing of the working of parliament, nothing of nationality,—had no preference whatever for one form of government over another, never having given his mind a moment’s trouble on the subject. He had not even reflected how a despotic monarch or a federal republic might affect himself, and possibly did not comprehend the meaning of those terms. But yet he was fully confident that England did demand and ought to demand that Mr. Melmotte should be returned for Westminster. This man was Mr. Melmotte himself. 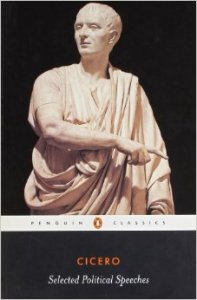 And then there’s Cicero’s Pro Archia, translated in the Penguin edition of Selected Political Speeches as “In Defence of the Poet Aulus Lincinius Archias.”  I read the Latin, but the Penguin is accessible.

Here’s the background:  In 64 B. C. a law of the tribune Giaus Papius expelled non-citizens of Rome.  (Does this sound familiar?)  Cicero’s speech was written in defense of the Greek poet Archias, who was accused of not being a Roman citizen. But Cicero’s brilliant speech is best known for its long laudation of reading, rhetoric, and, in short, the liberal arts.  Without books, poetry, and the study of rhetoric, Cicero says he could not successfully defend clients.  Archias was one of his teachers.

How could I find material, do you suppose, for the speeches I make every day on such a variety of subjects, unless I steeped my mind in learning? How could I endure the constant strains if I could not distract myself from them by this means? Yes, I confess I am devoted to the study of literature. If people have buried themselves in books, if they have used nothing they have read for the benefit of their fellow-men, if they have never displayed the fruits of such reading before the public eye, well, let them by all means be ashamed of the occupation. But why, gentlemen, should I feel any shame? Seeing that not once throughout all these years have I allowed myself to be prevented from helping any man in the hour of his need because I wanted a rest, or because I was eager to pursue my own pleasures, or even because I needed a sleep!

So here’s to the power of books!  The history is there, in novels, speeches, and poetry. And life is always, always, always a struggle.

4 thoughts on “When Everything We Read Applies: Trollope’s The Way We Live Now and Cicero’s Pro Archia”