My relationship with coffeehouses goes way back.

Long before Starbucks arrived in Iowa, I knew how to rate a cup of coffee. And when Starbucks made its debut in Des Moines in 2002, David Letterman joked about it on Late Night. Yes, Iowa is square, but the real joke is that it didn’t need Starbucks.  It had thriving independent coffeehouses, among them Friedrich’s, Java Joe’s, and Grounds for Celebration in Des Moines; The Java House  in Iowa City; and  Smokey Row in Pella, Oskaloosa, and Des Moines.  (David Byrne blogged about  biking to Smokey Row after he gave a concert in Des Moines.)

Where did I get the idea that coffeehouses were bohemian?  It dates from reading books set in New York, especially in Greenwich Village. I lost my NY mojo eventually, when invited to interview for a posh teaching job that paid only $8,000 a year. I felt like blurting out over the phone, “But I don’t have a trust fund!” 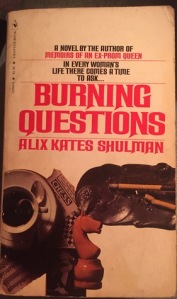 Characters who drink coffee in literature often  long to be bohemians.  When Zane, the narrator of  Alix Kates Shulman’s  neglected novel, Burning Questions, moves from Indiana to Greenwich Village, one of the first things she does is check out the Figaro Cafe. Although artists and writers frequent it, it does not pave the way to friendship, jobs, or  fulfilling her desire to write.

I wandered among the Village streets noting addresses only of shops; and when I forced myself to return to the Figaro for a coffee on Tuesday and again, despite my discomfort, on Wednesday, I wondered why. It was a silly position to be in, sitting there all alone with a tiny, long-empty cup (in which I had dropped a swirl of lemon peel), waiting for something or someone unknown—especially when nothing came of it but a growing conviction of the essential futility of waiting.

Don’t we all know the futility of waiting? When  I moved from Indiana to Washington, D.C., a city much dowdier than New York , I was sanguine that a coffeehouse would be my gateway to friendship.  How could it not be?  I had bought preppie clothes at L. L. Bean, shaved my legs for the first time in years, and had dropped from a size 11 to size 8 due to anxiety.  Casual friendliness had been a big part of the coffeehouse scene in Bloomington.  People were always skootching their chairs up and making plans to go to Days of Heaven a second or third time (it was my favorite movie). When I moved to D.C.,  this was not the case.   I ate tasteless tofu dishes at a natural foods cafe in Bethesda, or walked  to Dupont Circle to buy books and drink delicious coffee at Kramerbooks & Afterwords Cafe. I was out of my league among the hip clerks (were they really hip, or  was I just very, very  tired?) and the sleek lobbyists, politicos, and lawyers in their three-piece suits looked so dull.    Call it reverse snobbery, but I didn’t want to know them.  I wanted to go home to the Midwest!

There are many reasons to go to coffeehouses.  If you are poor, coffeehouses are a godsend.  First of all, they are very cheap: for the price of a cup of coffee, you establish squatting rights. Second, it gives you the illusion of having friends, even if you are just on nodding terms with the multi-tattooed barista.   Third, they are refuges for writers: every third customer is a writer looking for an excuse not to write.

But in my casual thirties, when I was a freelancer, I went to coffeehouses every day. At home the phone rang constantly, I gossiped with editors and was sworn to secrecy about scandals, did phone interviews, arranged in-person interviews, and spent hours at the typewriter (eventually, a computer). To get away from my work, I had to get out of the house. I would suddenly grab my keys and head for the neighborhood coffeehouse.

Lots of temperamental writers sat drinking coffee or reading a newspaper.    Writers like to brood or endlessly tell you why they cannot finish an article for an airline magazine.  They do not laugh when you ask if they have thought of writing about air.

In Henry James’s The Tragic Muse, there is much sitting and reading in coffeehouses in Paris.   Miriam, an aspiring actress, laughs when Peter Sherrington, an English diplomat, asks if she would object to  going to a cafe with him.

“Objection? I’ve spent my life in cafés! They’re warm in winter and you get your lamplight for nothing,” she explained. “Mamma and I have sat in them for hours, many a time, with a consommation of three sous, to save fire and candles at home. We’ve lived in places we couldn’t sit in, if you want to know—where there was only really room if we were in bed. Mamma’s money’s sent out from England and sometimes it usedn’t to come. Once it didn’t come for months—for months and months. I don’t know how we lived. There wasn’t any to come; there wasn’t any to get home. That isn’t amusing when you’re away in a foreign town without any friends….”

Reading  is a common coffee-related activity. Her mother reads there for hours.

…mamma was always up to her ears in books. They served her for food and drink. When she had nothing to eat she began a novel in ten volumes—the old-fashioned ones; they lasted longest. “

n Karl Ove Knausgaard’s’s My Struggle, Book 2, the narrator goes out for coffee every afternoon, but switches cafes every five days so he won’t have to chat with a barista. Most baristas keep their distance, but I know what he means:  you don’t want it suddenly to turn into Cheers.

There’s lots of good coffee in life and literature.  What are your favorite coffeehouses in life or lit?

4 thoughts on “Are Coffeehouses Bohemian?”