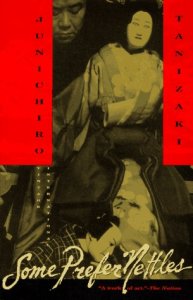 Junichuro Tanizaki’s Some Prefer Nettles is an elegiac masterpiece.

If you like Colette, you will enjoy Some Prefer Nettles.  Set in Tokyo and Osaka in the 1920s, it follows the fortunes of a couple who cannot decide whether or not to divorce. The protagonist, Kaname,  lost sexual interest in his wife Misako years ago, and she is having  an affair with Abu, with Kaname’s  permission.   They are at their best with their son, and are reluctant to disturb his happiness.

The plot, such as it, has parallels with the plays in the traditional Japanese Bunrako puppet theater, a form of art which Tanizaki describes at length and which is a mark of the contrast between Western civilization and old Japan.

The novel seems very modern.  It opens in medias res, with a passive-aggressive exchange that characterizes the couple’s relationship.

“You think you might go, then?” Misako asked several times during the morning.

Kaname as usual was evasive, however, and Misako found it impossible to make up her own mind.  The morning passed.  At about one o’clock she took a bath and dressed, and, ready for another eventuality, sat down inquiringly beside her husband.  He said nothing.  The morning newspaper was still spread out in front of them.

“Anyway, your bath is ready.” 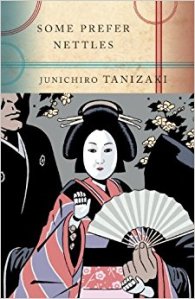 Kaname  has tentatively agreed on the phone that he and Misako will meet Misako’s father in Kyoto at the puppet theater.  She seems reluctant, but says she can “go to Suma” (code for meeting her lover) tomorrow.    Once at the theater, Misako desperately wants to leave early, while Kaname is concerned with courtesy and sampling the elaborate picnic provided by his father-in-law’s mistress.   Misako is a Westernized woman, which Kaname used to encourage and find  sexy.  Now he is taken aback by her lack of manners and finds her clothes unattractive.

Under the influence of his father-in-law, who is referred to as “the old man,” Kaname becomes fascinated not only by the  puppet theater but by the old man’s mistress,  O-hisa, described as a doll-like woman.  Earlier, when Misaku expressed her dislike of O-hisa, Kaname said, “She’s one of the antiques in his collection, exactly like an old doll.”

And indeed she is his father-in-law’s puppet/doll:  the young woman has been trained to cook his favorite dishes, takes lessons in traditional music, and wears old faded  kimonos he buys for her.  (She would prefer Western clothing, like Misako.)    The old man seeks an antique puppet he can buy, but there are only three puppet makers left in Osaka.

Some of us will think he already has a puppet in O-hisa!

Some Prefer Nettles is partly autobiographical.  Tanizaki lost interest in his wife, and in 1930 divorced her after arranging for her to marry the writer Sato Haruo.  He became a proponent of traditional Japanese culture after he moved to Osaka after the Tokyo earthquake in 1923. He often criticized the effect of Westernized Tokyo on Japanese art in essays and novels.  And in this novel about a cold marriage, he also explores the cultural polarity between Tokyo and Osaka.

The ending of the book is open–and  fits the theme of passivity in a marriage.

In the introduction, translator Edward G. Seidentsticker quotes Tanizaki on writing and the question of telling the reader too much:

“We Japanese scorn the bald fact, and we consider it good form to keep a thin sheet of paper between the fact or the object and the words that give expression to it.”

4 thoughts on “Some Prefer Nettles by Junichuro Tanizaki”