You may ask, Is Mirabile Dictu finally done with Ladies’ Greek?

Yes, I am reading, reading, and reading novels again!

1. The Chilean-American writer Isabel Allende’s stunning  first novel, The House of the Spirits, was translated by Magda Bogin and published in the U.S.  in 1985. This lush, witty, poetic masterpiece is laced with magic realism, and  reminiscent of the work of Gabriel Garcia Marquez.  Allende narrates the story of the rise and fall of three generations of the Trueba family in a politically unstable  country in South America.  The strong women of the family ignore Esteban Trueba, the volatile family patriarch, and live their own lives. I am especially fond of Clara, the  psychic matriarch who opens their enormous house to eccentrics and adds on rooms and staircases that go nowhere; her daughter, Blanca, a potter who teaches Mongoloids; and her radical granddaughter, Alba, who  feeds the homeless and hides refugees in the wake of a fascist coup. Even the tyrannical patriarch, Esteban Trueba, a landowner and far-right politician, is appalled in old age by violence of the new regime and begins to understand the women. Not only was I reminded of how very great Allende is, but I am eagerly looking forward to her new novel, In the Midst of Winter (October). 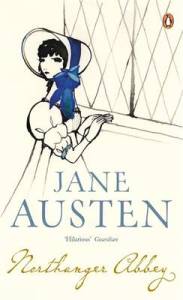 2. A rereading of Jane Austen’s Northanger Abbey.  The heroine, Catherine Morland, is one of Austen’s most comical characters, and I enjoyed my rereading of this charming little book.  Catherine, a fan of Mrs. Radcliffe’s The Mysteries of Udolpho and other “horrid” Gothic novel, hopes to find a ghost or secret manuscript when she visits the Tilneys at the elegant  Northanger Abbey. Her witty boyfriend, Henry Tilney, one of the very few of Austen’s heroes I heartily approve, brings Catherine down to earth when she gets carried away.  He, too, is a novel reader, and has a good sense of humor.  He says,

“The person, be it gentleman or lady, who has not pleasure in a good novel, must be intolerably stupid.  I have read all Mrs. Radliffe’s works, and most of them with great pleasure.  The Mysteries of Udolpho, when I had once begun it, I could not lay down again,–I remember finishing it in two days–my hair standing on end the whole time.”

3.  Charlie Jane Anders’s All the Birds in the Sky.  A nominee for the Hugo Award, this  science fiction novel was highly lauded.   Parts are charming, parts are a bit awkward and rambling, but it should appeal to fans of Harry Potter and Lev Grossman’s Magicians trilogy.  The story of the relationship between Patricia, a witch, and Laurence, a brilliant techie, includes lots of magic, science, sex, and global warming.  Though this novel seems to me very slight, it is a good weekend read.

AND NOW FOR TWO LITERARY LINKS.  When I spotted an online review at the TLS of Ann Hood’s bibliomemoir, Morningstar,I paid a month’s subscription fee to read the review.  Well, I will also benefit by reading other reviews for subscribers only.   I loved Hood’s memoir, and hope others will enjoy it, too.  (You can read my post on Morningstar here.)

Jenny Hendrix writes in the TLS,

…[Hood] credits her childhood bookishness with setting her on a path to the literary life of her dreams. Hood reflects on ten works of fiction that guided her through adolescence in the late 1960s and early 70s, and her discovery through them of how to live “the mysterious, unnam­able, big dream life I wanted”: “My parents learned about life from hardship”, she writes. “Me? I learned from books.”

In her blue-collar Rhode Island mill town, Hood was an oddity in a household of non-readers; in her hard-working Italian immigrant family, books were seen as a waste of time and money. But, after she had enjoyed a chance encounter with Louisa May Alcott’s Little Women, literature opened Hood’s eyes to possibilities beyond her immediate milieu. She learnt what it meant to be a writer from Sylvia Plath’s The Bell Jar; learnt to love language via the poet Rod McKuen; and credits John Steinbeck’s Grapes of Wrath with teaching her how to write. There were other, extra-literary lessons as well, in subjects her family didn’t discuss. As the Vietnam War drew to a close, the novel Johnny Got His Gun sharpened her political thinking; the free-loving teens of The Harrad Experiment opened her eyes to the mechanics of sex. Together, these books built Hood an off-ramp from what she experienced as the dull and uninspiring trajectory of her peers: baptized in the church at one end of the town’s main street, married at the club in the middle, and buried by the funeral parlour at the same street’s far end.

The tough women criticizing women at the TLS always find a few negative things to say, and so Hendrix calls the book “heart-warming,” which is not the worst thing I’ve ever heard!  Overall, she liked the book.

If you like free reviews, and don’t we all, you can read the insightful review at  The Minneapolis Star Tribune .  Laurie Hertzel, the book page editor, aptly describes Hood’s graceful book.

In these 10 appealing essays, Hood deftly recounts pivotal moments in her early life, recalling not just what happened, but how she felt and how wonderful it was that the right book seemed to appear at the right time. “Once again,” she writes, “my world had been cracked open by a book.”

Hood’s book is actually one of my favorite books of the year.