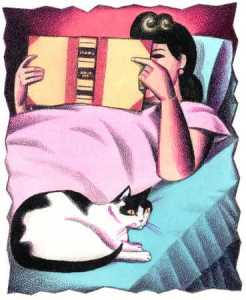 I’ve been on a break, and it’s been fabulous.

Why write ever?   That’s what I’ve been asking myself.

It’s much more fun to spend Saturday reading in bed.

There are strict rules for reading in bed.  First, you must pick out five or six books and arrange them near your pillow. Miss Buncle’s Book might be good for the first hour, but what if you suddenly crave Vanity Fair or Casino Royale?  Second, set your tea tray on the bedside table.  You’ll need  tea and snacks:  I had to make do with a stale piece of fudge from Christmas, because I didn’t feel like getting out of bed to bake Our Famous Weekend Oatmeal muffins. (“You bake them.”  “No, you bake them.”)  Third, close the bedroom door:  you don’t want those pesky family members or pets interfering with your reading.

It’s nice to take a day off.

Yes, I finished Norman Collins’s charming, funny, sad, albeit very long, novel, London Belongs to Me.  It is not quite a classic, but is a rambunctiously entertaining middlebrow novel.  It is the kind of book  Virago or Persephone readers might enjoy.

In this moving novel, Collins interweaves the stories of the motley lower-middle- and lower-class residents of Number 10 Dulcimer Street in London.  Their stingy landlady, Mrs. Vizier, broods in her basement apartment, wondering if any of her tenants are bringing the tone of her house down.

But her tenants are a plucky lot, and they support one another through innumerable troubles, including a murder trial.

In the preface, which is a paean to the city,  Collins describes London architecture, from shabby cathedrals, mansions, and crowded markets to “mile upon mile of little houses, most of them as shabby as St. James.  If you start walking westwards in the early morning from somewhere down in Wapping or the Isle of Dogs by evening you will still be on the march, still in the midst of shabby little houses–only somewhere over by Hammersmith by then.”

Then he moves on to people:  “Real Londoners who sleep the night in London as well as work the day there.”

And of course this is a novel about real Londoners.

Collins’s quirky characters are reminiscent of Dickens’ Londoners.  Mr. Josser, a retired clerk, dreams of moving to a rural cottage, but first must battle his sharp-tongued but compassionate wife’s prejudice against the country.  Connie, a former actress who works as a cloakroom attendant at a night club, ignores old age by perkily insinuating herself at parties, crime scenes, and other dramas.   Percy, a mechanic and thief, gives stolen rugs to his mother, Mrs. Boon, who has no idea he is a criminal.  Mr. Squales is a medium who cons Mrs. Vizier, the landlady, a spiritualist, into supporting him; and Mr. Puddy, a night watchman,  is a canned food gourmand whose whole night is ruined when a can opener fails.

The novel begins with Mr. Josser’s retirement from Battlebury and Sons on Christmas Eve in 1938.  They give him a gift of a “handsome clock, a mammoth marble affair with an eight-day movement.”  Mr. Josser comically and precariously lugs it on the tram and to the wine shop and then home.  After he stops at a shop to buy a bottle of wine and Christmas crackers, he can’t seem to balance clock, umbrella, rolled-up coat, and shopping.

“The clock itself was extraordinarily difficult to pick up–difficult that is for a man who is already carrying his office coat, an umbrella and a box of crackers.  He would never have managed it, in fact, if a passer-by hadn’t come along and offered to help him.  With his aid, Mr. Josser finally got the clock up–there were queer jangling noises inside it as he moved it–and then the stranger piled the box of crackers on top of everything else.  Mr. Josser was simply a pair of legs walking along under a large and awkward load.”

Once home, Christmas turns into the  kind of long family party we all recognize.  But this isn’t a cozy family book.  There is lots of action.

Connie is arrested in a raid at the night club, and would have been evicted if the Jossers hadn’t supported her.  Percy has a tremendous crush on Doris Josser, which luckily she doesn’t return:  he ends up killing a blonde during an argument while he speeds through London in a stolen car.  Again, Mr. Josser is the paterfamilias:  he spends hundreds of dollars in savings to hire a lawyer for Percy in the murder trial.

And London is getting ready for war:  the Jossers’ son, Ted, and Doris Josser’s fiance, Bill, a young doctor, enlist:  who will look after Ted’s hapless wife, Cynthia, and Baby?

I cried over Dunkirk:   that tragic scene alone is worth reading the book for.

Londoners go on, even in wartime.

By the end of the book I felt a part of London, too, though I live in a city on the prairie.