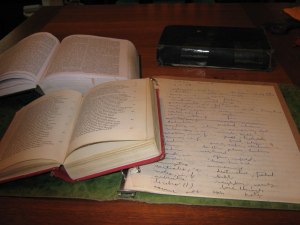 Reading Virgil is a joy.

I was happy when I came to Book XII, line 239, and recognized the allusion of the verb serpit to the serpent imagery in Book II.

“…and the murmur snakes (creeps) through the army.”

Y0u spent a week, perhaps it felt like years, studying Book II with Ms. Mirabile, who expounded on the serpent and flame imagery (from Bernard Knox’s famous essay) and possibly xeroxed the essay for you AT HER OWN EXPENSE.  Did you reread The Aeneid later at the beach, as the great Cecil Wooten advised Ms. Mirabile’s generation, who strongly recommended it to you?

Well, I did.  But then I MIGHT be Ms. Mirabile.

Back to the serpent imagery in Aeneid Book II: the Greek Sinon (think “sinuous”) persuades the Romans to bring the wooden horse into Troy; then serpents strangle the priest Laocoon and two sons after he warns the Trojans against Greeks even bearing gifts; and the flames of Troy flicker like serpents.

In Richard Tarrant’s commentary for the new Cambridge edition of Aeneid, Book XII, he details the use of serpit in Latin literature. If you’re a student, you can skip most of the philology and use the notes for translation.

In Georgics, III, 468,Virgil warns us to cut the disease  (or “mischief”) with a knife

…before the dire infections snake through the unsuspicious herd (or through the heedless people).

“This rumor (snakes) gets abroad.”

I very much enjoy reading these notes.  Would everybody?  No, but if you don’t have time for the history, the manuscript criticism , and so forth, you don’t have to read all of them.

You have to be a little bit crazy to want to curl up with Virgil and a dictionary, but some of us still do it.

David Bamber as Cicero in “Rome”

NEXT UP:   Anybody want to join my Cicero group?  I’d be astonished if you did.  Perhaps I’ll read Pro Murena.

Or you can just watch the miniseries, Rome, if you can’t face Pro Murena. David Bamber plays Cicero.

SPRING BREAK traditionally arrives during spring.  Of course we have only had spring here in the Back of Beyond since global warming.  Some years back, I waited for a train in Chicago on a freezing March day, the river dyed green, and a parade marching through snowy downtown.  That was spring.

This year, that was spring again.  It was cold.

Here is what I did to celebrate the advent of spring.

I watched the miniseries, Rome.  I love Mark Antony (who could not? he’s very funny) and the evil Atria (Octavian’s mother), but of course am especially drawn to the two ordinary soldiers who are off-center yet at the center of quotidian life, Lucius Vorenus and Titus Pullo.

I TURNED THE THERMOSTAT UP.  We’ve all known since Jimmy Carter’s presidency that we should keep the thermostat down and wear a sweater.  But it was so cold last week that I left the heat at 60 at night.
It was just a Spring Break thing, but I certainly felt better.

Let’s get that solar power going so we can all be warm indoors!