When we moved, everybody warned me, “There’s no culture there.”

It is, however, a beautiful place to live.  We bicycle on the prairie, we ride by the Mississippi, we career over walnuts in the fall and almost fly off our bikes, we pedal through the woods, we fix tires beside lakes, we coast down hills, we ride past Amish farms, we avoid the bar on the trail (The Flat Tire), we stop to eat pie or grab a snack at Casey’s in small towns where there are cow statues.

When we want culture, we drive to Nebraska and visit Willa Cather’s childhood home in Red Cloud or Bess Streeter Aldrich’s house in Elmwood.

Or we go to a university library.

There is another university library where we can check out books for $20 a year.  It is not a liberal arts school, but the library has a big literature section, always deserted.  During my Anna Kavan phase (it never occurred to me that I would shock my family on Thanksgiving with talk of “heroin addict lit”:  Kavan, Will Self, Edward St. Aubyn, William Burroughs), I found many of Kavan’s books, a biography, and even Rhys Davies’ novel about Anna Kavan, Honeysuckle Girl.

Last week I got lost in the Scandinavian literature section. 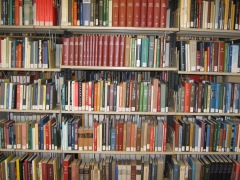 Lost in the Scandinavian Section

I picked up a book by Tove Jansson  before I found the American lit section and the new book club selection for Emily Books, Sarah Schulman’s Empathy.

WHAT I’M READING.  I’m reading D. H. Lawrence’s The Rainbow, the first in the trilogy which includes Women in Love and Aaron’s Rod.

The Rainbow is a family saga, poetic, incandescent, and rich with adjective-and-adverb-heavy prose, Thomas Hardy on drugs.

On the opening page, Lawrence describes the Brangwen family.

They were fresh, blond, slow-speaking people, revealing themselves plainly, but slowly, so that one could watch the change in their eyes from laughter to anger, blue, lit-up laughter, to a hard blue-staring anger, through all the irresolute stages of the sky when the weather is changing.”

Shouldn’t this be read aloud?

But on page 200, the powerful section about their daughter Ursula begins.

In The Rainbow, we follow Ursula’s story from birth through young womanhood.  She struggles as a student and a teacher to make her life mean more than the mechanization of society. (In  Women in Love, she is very much in control of her own life, negotiating a relationship with artistic Rupert Birkin, a school inspector.).  Ursula dreams about poetry and love, loves freedom, and dislikes the discipline of school until she becomes involved with a lesbian teacher who takes advantage of her.  (I had completely forgotten this lesbian relationship, which doesn’t last long:  Ursula fobs off her lonely, pathetic lover on her industrialist uncle.)

After matriculation,  Ursula hates staying home with her lax mother and all the undisciplined children, so she becomes a teacher at 17.

The school is horrible, as so often these places are.  Lawrence is brutally honest:  he was himself a teacher for a time and does not sentimentalize.   Ursula  has 60 students (an impossible number, as any teacher will tell you),  has no training, and barely knows what she is saying half the time.  Her view of education is artistic and Rousseu-like, but this is not suitable to the dynamics of the large group or the expectations of the headmaster.   She must learn to discipline the students mechanically, stop seeing them as individuals (which is difficult to do anyway in a huge group), and prepare them for tests.   Ursula learns she will lose her job if she doesn’t discipline the students:  her headmaster often grabs one of them, canes them, and says they are the worst group in the school.  After she has been so soft and sympathetic, the students despise her.  They taunt her, and some of the boys throw rocks at her as she walks home.  Finally she canes a boy and regains authority.  It is a horrifying experience.  But then she is accepted as a teacher. 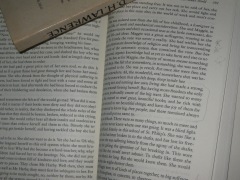 Her friend, Maggie, another teacher who does the job as a job and dislikes it, helps her survive.  Both love poetry and nature, and this time it Ursula has a straight relationship, a warm non-sexual friendship with a woman.

I used to teach part-time to eke out a living, and at one particularly horrible school (the only horrible one, to be honest), another rebellious teacher, a man who couldn’t believe FOR THIS HE’D GONE TO COLLEGE, respected the school so little that he turned in his grades only when it was convenient for him, and begged me to run away to San Francisco with him and teach at a hip school he’d heard of, which made me laugh very hard, because my particular subject wasn’t taught much out west, and did his girlfriend know about the proposed menage?  He was a good friend, and thought this was very funny, too.

I don’t usually write in books, but starred and bracketed page 393, fascinated by Lawrence on suffragettes, freedom, and work.

It was so difficult.  There were so many things, so much to meet and surpass.  And one never knew where one was going.  It was a blind fight.  She had suffered bitterly in this school of St. Philip’s.  She was like a young filly that has been broken in to the shafts, and has lost it freedom.  And now she was suffering bitterly from the agony of the shafts.  The agony, the galling, the ignominy of her breaking in.  This wore out her soul.  But she would never submit.  To shafts like these she would never submit for long.  But she would know them.  She would serve them that she might destroy them.

A very great book:  Lawrence is original, writes strangely but poetically, is often underestimated, and is sometimes sexist, occasionally absurd, but has created some of the best women characters in literature.

5 thoughts on “Culture, Lost in the Scandinavian Section, & D. H. Lawrence’s The Rainbow”