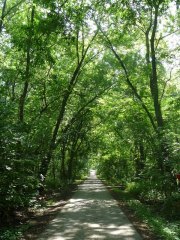 Not my picture, but this  is my trail.

It rained, it rained, it rained, but then yesterday we bicycled 32 miles.  It is a lovely trail, and my husband always tells me to write about it. I tell him I have nothing to say about bicycling, and it is true.  What to say?  Pedal, glide, change gears, chain falls off, put chain back on, pass people on the trail, look at the brick factories, look at the grain elevators, stop and have a snack, sit at a picnic table and read.

Nothing really happens here–it is a tranquil place with very little going on–and bicycling is popular.  The bike trails in the city and country have changed lives:  it is possible to live without a car, we can get anywhere in our “big” little city by bike, and thousands of people from all over the country come for a cross-state bicycle ride (known for partying and sleepless nights).

When writing about bicycling, what to say?  We talk about the wind, where we’re from, cows ahead on the trail, and share our sunscreen.  At the depot the woman who sells the candy and pop wants to talk.

We ride to a small town, and want to take a break in the picnic shelter, but the sky turns blue-black and we have to go.  We coast downhill, then climb uphill for several miles, and beat the rain.  It is the first time in years we’ve bicycled this far without taking a break.

Adultery in Anna Karenina & War and Peace.  Adultery has a high price for Tolstoy’s women.  We have only to compare the consequences for Anna Karenina, the beautiful, sympathetic heroine who falls in love with Vronsky, and Princess Hélène, the cheating wife of Pierre in War and Peace, to realize that Tolstoy disapproved of both.  Anna has a conscience and Helene has no remorse, but both die prematurely.   Anna commits suicide, and Helene is struck down by an unknown sickness.

Whether consciously or not, Tolstoy gave them names which, if not quite homophones, do sound similar:  Anna and Hélène.  (When you reread the books back-to-back, you notice other characters who are nearly doubles, though not in names: Kitty-Natasha, Levin-Pierre…)

Adulteresses often die in literature, especially in the 19th and early 20th century:  Emma Bovary in Madame Bovary and Edna Pontellier in Kate Chopin’s The Awakening of suicide; Mattie in Edith Wharton’s Ethan Frome, whom Ethan is in love with, does not die, but is crippled in an accident; refreshingly, Willa Cather allows adulteress Marion Forrester in A Lost Lady to get away from the small town by breaking the rules, investing money through a shady lawyer.

Anna Karenina was based partly on a real-life incident.  At an inquest, Tolstoy saw the corpse of Anna Pirogova, the rejected lover of one of Tolstoy’s neighbors, who threw herself under a train.

Tolstoy portrays Anna as a lively, brilliant, married woman.  When she dances the mazurka with Vronsky at a ball,  it shatters Kitty, who has expected Vronsky to propose.  Anna is infatuated with Vronsky, but decides to leave Moscow the next day, knowing she has erred in hurting Kitty; telling Dolly, her sister-in-law, that she has erred; and Dolly making light of it, saying she doesn’t want Kitty to marry Vronsky anyway.

Vronsky follows Anna on the train back to Petersburg, and after a year they become lovers. Anna’s husband, a sarcastic, cold-blooded bureaucrat, doesn’t want a scandal, but she is hopelessly in love with Vronsky and finally leaves her family. When Karenin won’t let her see her son, she agonizes.  And later, when Vronsky loses interest in her, and she is an outcast, she throws herself under a train.

In War and Peace, Helene is an unsympathetic character.  She is described as stupid and cruel, she marries Pierre for her money, and considers him foolish for interfering in her love life.  Pierre hates her, cannot believe he married her, and loves Natasha, who is engaged to his friend, Andrei.

The odd thing is that beautiful Helene, unlike Anna, does not lose her place in society.  She is considered a wit, and in sophisticated Petersburg everyone blames her husband, fat, smart, intense Pierre, for their marital difficulties.  He tries to leave her, and she continually follows him.

But Tolstoy kills her off, just the same.  She gets ill–everyone expects her to recover–and we are shocked when she dies, though she is a dreadful character.

Kitty in AK, a beautiful, happy young woman, is desperately in love with Vronsky, and becomes very ill after the non-proposal; her parents take her to a spa in Germany, where she recovers, partly by befriending a woman who does good to all the sick people, and trying to do good, too. Natasha in War and Peace also becomes ill after she and her fiance, Andrey, break up:  unlike Kitty, she has been almost unfaithful, and tried to elope with Helene’s brother.  Natasha recovers from her illness slowly, and for a while goes to church with a very religious woman.

I love both books so much that I could read them every year, but I am promising myself that I won’t read Tolstoy in 2014,

5 thoughts on “Bicycling on Sunday & Tolstoy’s Adulteresses on Monday”