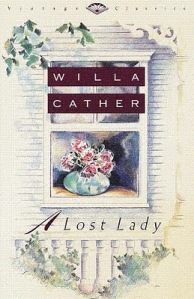 I often say there is no narrative in the Midwest.

It was very difficult to get hold of a story when I was growing up.

Midwesterners, too, are starved for narrative, even those who claim they don’t read fiction.  A Prairie Home Companion is popular on NPR.   Fans follow Garrison Keillor from Minnesota to Ames, Omaha, and Madison, wanting to hear his radio show live.  I once absent-mindedly said A Prairie Home Companion was sentimental, and had to renege when several people bristled and claimed our city was like Lake Wobegone.  (It is not.)

I turned to books long ago.

Some of the best Midwestern writers come from Nebraska.  Pulitzer Prize winner Willa Cather, raised in Red Cloud, Nebraska (a fascinating place to visit), had to leave Nebraska to write her masterpieces, The Professor’s House, the story of a disenchanted middle-aged professor, and A Lost Lady, a novel about a charming, if desperate, woman stuck in a small town after her husband’s bank fails.  These two novels are well-plotted but more ambiguous than Our Antonia, a book often chosen as a school text.

Bess Streeter Aldrich, who lived for many years in Elmwood, Nebraska, was a very popular writer of the 1920s and ’30s. The first few chapters of her best book, A Lantern in Her Hand, ramble a bit, but this excellent novel, a historical record of pioneer women’s lives, picks up momentum as it goes on.

Margaret Wilson, who was born in Traer, Iowa, won the Pulitzer in 1924 for her forgotten novel, The Able McLaughlins, a story of a rape and its consequences.  Wilson has a uniquely philosophical point of view:  she graduated from the University of Chicago, worked as a missionary in India, and returned to Chicago and attended Divinity School before she began to write short stories and novels in the 1920s.

If Virago had an American imprint, Wilson’s books might well be revived.  Wilson’s  language, though unassuming and plain, is layered skillfully into the deft storytelling of her moving, radical novels as she reflects on social justice. Her 1937 novel, The Law and the McLaughlins, a sequel to The Able McLaughlins, is a fascinating moral consideration of capital punishment.  It is a Greek tragedy, set in Iowa.

In 1868 Willy McLaughlin, a farmer, is following wolf tracks when he finds two dead men hanging from a tree.   The woods are so far from any road that he thinks he is hallucinating. But he goes closer, and the bodies are real.

The Squire (his uncle),  the sheriff, the coroner, and his father (a Justice of the Peace) gather to  identify the corpses.  They want “justice”–to track down the killers, try them in a court, and hang them.

But no one can identify the dead.  Finally they learn the men had been horse thieves, and the three killers were the horse owners. 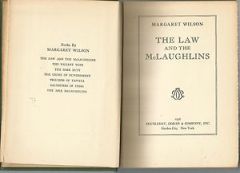 The women are from the beginning appalled.  They think of the wives of the men lynched, and the wives of the criminals. Mrs. McNair, who with her husband had unwittingly fed and sheltered the killers during a rainstorm, refuses to identify them.  Like the women in a Greek tragedy, they lament, grieve, and repeat that killing more men will not bring back the dead.

The sheriff plans to catch the perpetrators at the funeral of the dying wife of  one of the men.  The men have been hidden by their community 50 miles away.

Jean, Willy’s sister, is particularly disturbed when she hears this plan.  When her brother says it’s a war between the law and evildoers,  Jean says,

Well, when we get the vote we’ll change all that!  We’ll arrange to let women die in peace, if their men do break the law….  If I thought they would do such an evil thing, I would write to the woman and warn her! ‘Plan to go away some place and die where the sheriff can’t see you,’ I’d write her.  I have a mind to do it!”

Throughout the book, women deplore the unfairness of capital punishment.  Jean takes a stand, hopes to help the men break out of jail, and learns the real story of the murder.  A  Congregationalist minister speaks out against capital punishment, pointing out that the Iowa pioneers, who came from Scotland, New England, and other places, have known civilization and justice, but the minds of the next generation will be poisoned if the law is not observed.

Graham Greene wrote in a review:   “She has an admirable gift for very simple direct narrative, and her theme has always been passionately realized in terms of human beings…. we are always aware of a writer of fine moral discrimination and a passionate awareness of individual suffering.”