But I never read novels about Harvard.  I don’t know a single person who went to Harvard.  It is the Ivy League school I consider the most elitist. 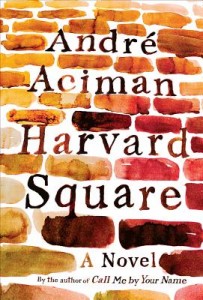 So I am very surprised to find myself spellbound by Andre Aciman’s new  novel, Harvard Square.  It is beautifully written–I am going slowly because every word and sentence are so perfectly balanced–and it is possibly a classic about outsiders.  I’ll let you know when I’ve finished.

The narrator, a Jew from Alexandria, Egypt, is spending the summer in Cambridge.  He is lonely, has failed his comps, and his friends are gone.  He hangs out at Cafe Algiers, where he meets a contentious, politically aware Arab cab driver.

The narrator tells us:

Cambridge was a desert.  It was one of the hottest summers I’d ever lived through.  By the end of July, you sought shelter wherever you could during the day; at night you couldn’t sleep.  All my friends in graduate school were gone.

As he becomes more involved with Kalaj, the two of them earnestly discuss women and Paris, their favorite city, so very far away from Cambridge, and he becomes even more detached from Harvard. He reads and rereads seventeenth century lit for his comps, but he doesn’t believe he’ll pass. Does he like books at all?  Does he like many books at all, he wonders?

Aciman writes so gorgeously that I began to remember my university days, which, as Aciman’s narrator knows, are better when you look back than when you are there.  Here is a list of books about “school days.”  Please add your favorites!

1. The long, langorous first part of Evelyn Waugh’s Brideshead Revisited, set at Oxford and about Oxford, is my favorite university novel ever, and I know it’s yours, too.  Charles Ryder meets Sebastian Flyte one night when Sebastian, drunk, puts his head in the window of Charles’ first-floor digs and throws up.  The next day he apologizes with flowers; Charles begins to spend his days with Sebastian, eating strawberries, drinking wine, learning about art and decoration, and never thinking about work.  Sebastian is a Catholic, his family is very rich, and when Charles visits Sebastian at Brideshead, Sebastian fears he will lose his friend.  Sebastian does poorly at Oxford and his mother wants him watched:  Charles must take sides.

2.  In Pamela Haines’ charming “middlebrow” novel, Tea at Gunter’s, Lucy, the narrator, occasionally accompanies her mother to Gunter’s, an old-fashioned tea room in London.  Her mother reminisces with her ex-fiance, Gervase, who was mentally shattered in the war, about Patmore, the estate where they grew up.  Later, when Lucy attends secretarial school, she has very funny adventures with the eccentric teachers.  She also meets Julia (think Sebastian’s sister in Brideshead Revisited), and before she knows it, she is involved in a whirlwind of aristocratic parties.

3.  Marge Piercy’s Braided Lives.  Much of Piercy’s remarkable novel is set in Ann Arbor, where the brilliant heroine, Jill, who grew up in Detroit, attends the University of Michigan in the 1950s with her blander cousin, Donna.  Later, in New York City in the 1960s, Jill becomes a radical, and must face the repercussions of needing an abortion before Roe v. Wade.

On my next two lunch hours I see a doctor a day.  Each gynecologist examines me, painfully, and tells me I am pregnant.  I try out my routine, including telling each of them I will kill myself.  They tell me they can call the police; they tell me I must have the baby; they charge me one ten dollars and one fifteen; they lecture me on morality.  I am late back to work both days.

4.  Pamela Hansford Johnson’s  Night and Silence Who is Here? is one of the  funniest academic  satires I’ve ever read.  An English playboy is offered a job at a New England college where he spends most of his time foraging for food, as there are no stores or restaurants and he can’t drive.  He is also determined to do no work.

5.  In Elizabeth Jolly’s Foxybaby, the middle-aged heroine, Alma Porch, a writer, takes a job teaching drama at a “Better Body through the Arts Course”–an arts program with dieting– at an obscure college in an abandoned Australian town.  Very funny and strange.

6.  Charlotte Bronte’s Villette.  Lucy Snowe, the narrator, teaches at a girls’ school in Brussels in the 19th century.  She doesn’t attract the man she is in love with, but does fall in love with another man.  This is Bronte’s best book:  the realistic Jane Eyre sans Rochester.

7.  Vance Bourjailly’s Now Playing at Canterbury.  A group of professors put on an opera at a Midwestern university.

8.  H. G. Wells’ Ann Veronica.  Ann Veronica, a biology student, seeks independence from her father and runs away to London, where she finds work in a biology lab to support herself, becomes involved in radical politics, and falls in love.

10.  Pamela Dean’s Tam Lin.  Pamela Dean’s novel Tam Lin, set at a small college in Minnesota in the ’70s, is a whimsical chronicle of an undergraduate education.  Part college novel, part offbeat fantasy, it is A Midsummer Night’s Dream crossed with  Donna Tartt’s The Secret History–with a dash of the ballad Tam Lin.

4 thoughts on “Andre Aciman and Others: School Days in Literature”