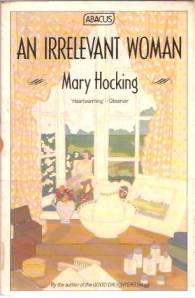 Mary Hocking’s An Irrelevant Woman, a poignant novel about a woman’s mental breakdown, is concise, gracefully-written, and painful.  Published in 1987, this story of an older woman’s descent into psychotic depression when she loses her purpose is sympathetic, if not entirely realistic. This is one of several women’s novels of the ’60s, ’70s, and ’80s that treat breakdown as a feminist, sociological predicament rather than a psychiatric problem .  (Doris Lessing’s The Summer Before the Dark is by far the best of these.)  Drugs are not used to help the patients; the women must simply find their way out.

Mary Hocking’s razor-sharp perceptiveness about women’s lives has been compared to Barbara Pym’s comic clarity, perhaps because both writers are interested in religion (though that is not apparent here). Hocking’s smartness seems to me to be more aligned with Penelope Lively’s psychological acuity.  But I must say, Hocking’s An Irrelelevant Woman is a more serious novel than A Particular Place, which I read a few weeks ago.  I could see the Pymian whimsicality there.

In An Irrelevant Woman, a tramp’s visit on Easter precipitates the breakdown of the heroine, Janet Saunders, the wife of a writer and the mother of four adult children. The tramp looks in the window and sees her unraveling.

…she pulled on a pair of oven gloves and stood poised. A look of uncertainty came over her face which, for no apparent reason, changed rapidly to one of dismay.  And worse.  In this unguarded moment the woman’s face betrayed the naked terror which might be occasioned by coming without warning, in a nameless place, to the edge of a precipice; or by being confronted in one’s own household with a forgotten, long-locked door behind which may lie chaos, a rotting human corpse, or an equally defunct mouse.  The woman opened the oven door and peered inside.  Whatever she saw did little to reassure her…

It is a bit clichéd, a woman’s breakdown in front of the oven door (are we to think of Sylvia Plath?); Lessing does it with a mirror. (I have always taken mirrors more seriously than oven doors.)  But Janet, the perfect housewife, attends to the tramp’s needs and makes him a sandwich before going back to her breakdown.   Later, she unravels during  Easter dinner and descends into a catatonic depression in front of her family.

Janet’s family’s egocentric response to her illness, however, turns the novel into a gentle comedy of manners. The family is perfectly and irritatingly depicted. The children have moved away and no longer need Janet; her husband can take care of himself.  But now that she has broken down, they all want her back in the kitchen.  Her oldest daughter, Stephanie, an overbearing, insensitive psychologist, understands nothing about Janet’s feelings; her son, Hugh, an attorney, is nonplussed and stays out of it, as does her younger daughter, Katrina, who is devastated by a romance with her professor; and her son, Malcolm, an actor, refuses to believe Janet incapable of taking care of him.  (Indeed, Janet does respond to him finally.)

Janet’s husband,  Murdoch, is sympathetic, but he wonders repeatedly if she still loves him.

Janet was sorry for him in a sick, irritated fashion.  She said, ‘I shall always love you,’ in the manner in which she might have repeated the Lord’s Prayer, without understanding a single word.

A long as Janet sees Dr. Potter, a psychiatrist who is content to analyze her benignly, Murdoch does not interfere. But when she wanders off to a homeless people’s abode and begins psychotically to garden in a rainstorm, Murdoch, who has followed her, finally understands the extent of her illness.

There is much in this novel about helping others that eventually heals Janet:  the tramp, an encounter with the homeless, Dr. Potter’s hostel for young women, and her insistent son Malcolm.

I must say that Janet’s comeback from psychosis is sudden, and entirely without drugs.  It doesn’t square with what I know about psychiatry:  people took antidepressants and other drugs before Prozac, and Prozac itself has been around since 1987.  It is cruel to deprive people of drugs that can cure , or at least help, with chemical imbalances caused by stress.   One of my greatest friends had a manic episode after taking a steroid for an ear infection: she tried to order a Jaguar, not her usual style, purchased a lot of very expensive china, and  began to wear her frilly bra over her t-shirt.  She hated the pills, but they got her out of the hospital and out of that frilly bra over her clothes. Another friend believed her child was Rosemary’s Baby; she had an untreated psychotic postpartum depression, and the last I heard, she was an Ativan addict, wandering from doctor to doctor to get more prescriptions.

No, the world of mental illness is not a feminist place.

The best of these feminist breakdown novels by far is Nobel Prize winner Doris Lessing’s The Summer Before the Dark (1973). The following synopsis is from my old blog:   Kate Brown, 45, is alone for the summer.  She accepts wryly that her husband is having an affair in America:  middle-aged women put up with infidelity.  She had planned to stay home for her son, but when it turns out he will be away, she busies herself with a summer job as an interpreter for a food conference.  She wears fashionable clothes and has beautifully cut-and-dyed hair; she has an affair, which is nice, but ephemeral.  Later in the summer, she has a kind of controlled breakdown in a rented room in a young hipster’s house.   Kate lets her hair go and experiments with walking  in front of construction workers in different outfits. Naturally, they whistle when she looks young, and ignore her when she wears baggy clothes. By the end of the summer she knows herself and returns to her family.  This is not a “hen lit” book where the heroine finds a new man in the end.  When we are older, we lose our men.

In both Hocking’s and Lessing’s novels, the causes of breakdown are sociological rather than psychiatric. Although Lessing’s sophisticated heroine does not entirely lose herself, it is clear that Hocking’s Janet is is psychotic:  this is not just a feminist breakdown.  Her mental illness lasts for months, and I cannot imagine such a deep illness in a middle-class family untreated by psychiatric drugs or hospitalization.  Even the most old-fashioned of psychoanalysts know they cannot treat the psychotic with chat.

The world of mental illness novels today must be very different.  Or I hope so.