I am lucky if I get through two.

I tried  Colum McCann’s TransAtlantic.  It is elegantly written, but I am not a fan of historical novels, and I saw little connection among the historical characters, so I put it down regretfully after 160 pages.  (Most love this book.) 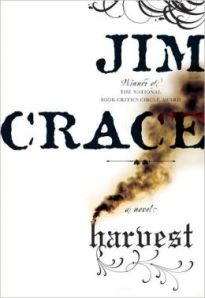 Harvest begins and ends with fires.  The ring composition is absolute, creating a dizzying verisimilitude.

The narrator, Walter Thirsk, an intelligen farm laborer who loves his simple life, narrates the events that herald change and catastrophe in a feudal village. A dozen years ago, Walter came to the farm as Master Kent’s personal servant; after Walter married, he moved into his own house and  worked on the farm.  Since his wife’s death, Walter has stayed out of inertia.  But he is viewed as an outsider when a blaze disrupts the villagers’ lives.

On the day after the harvest, smoke awakens the villagers.  One twist of smoke indicates that newcomers have built a hut and lit a fire so they can stay; the other that Master Kent’s barn is on fire.  Walter knows, and is sure others know, that three men, the Derby twins and Brooker Higgs, irresponsibly ingested “fairy cap” mushrooms and then accidentally set the barn on fire.  They were trying, while high, to drive away some of the master’s doves that had been thieving the grain.

The barn smells of roasting birds.

Walter’s hand is wounded from the fire and he needs to tend to it. Like the others, he is looking forward to the harvest party and doesn’t want to get involved.  Life is good in the village under Master Kent.  So he doesn’t speak up.

In any other place but here, such willful arsonists would end up gibbeted.  They’d be on hooks in common view and providing sustenance to the same thieving birds they’d hoped to keep from gleaning.  But, as I’ve said, these fields are far away from anywhere, two days by post-horse, three days by chariot, before you find a market square; we have no magistrate or constable; and Master Kent, our landowner, is just.  And he is timid when it comes to laws and punishments.  He’d rather tolerate a wrongdoer among his working hands than rob a family of their father, husband, son.

And so the newcomers, rather than the twins and Brooker Higgs, are scapegoated for their fire, supposed to have started the fire in the barn while stealing birds.  The two men are pilloried, and the woman disappears.

There are other newcomers:  Philip Earle, known as Mr. Quill, is a charming cartographer, who has come to make two maps:  one of the farm, and one of what it may become when the new owner, Master Jordan, turns it into a sheep farm.

Master Kent’s wife’s cousin is the rightful heir, and Master Kent must step down.  No more barley. Sheep-farming will change the villagers’ way of life.   When Master Kent’s horse is killed,  Master Jordan organizes a hunt for bloodied garments. He is happy to scapegoat women.  He is sadistic.

There are many “twists of smoke” in the plot, but Crace’s strength lies in the stark grace of the prose and the sharply-observed scenes that add up to more than the sum of their parts.  This is a brilliant novel,  worthy of the Booker Prize.