We love London and are going back next year.

Meanwhile, I enjoy being an American because the coffee is just so damned good here.

Although I adore English literature, and you probably thought I was reading Dickens, I am reading American pop fiction of the ’20s and ’30s at the moment.  Vintage Movie Classics has reissued four books that inspired movies, Edna Ferber’s Showboat and Cimarron, Fannie Hurst’s Back Street, and Booth Tarkington’s Alice Adams, which won the Pulitzer in 1922. And Ferber won the Pulitzer in 1925 for So Big.

So you can see, these are  good books, even if not quite classics. 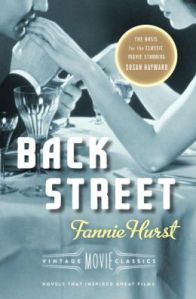 I recently read Fannie Hurst’s Back Street, published in 1930.  Back Street was adapted three times for the screen, the first starring Irene Dunne and John Boles (1932), the second starring Margaret Sullivan and Charles Boyer (1941), and the third starring Susan Hayward, John Gavin, and Vera Miles (1963).

In the opening chapter of Back Street, which is a fast, compelling read, Ray Schmidt, a beautiful young German-American woman in Cincinnati, is irresistibly attractive to men. She enjoys living on the verge of “fast” and has few qualms about the salesmen she allows to take her to dinner.  She flirts, but she doesn’t let the men go too far.

Still, she knows people talk about her.

Ray lets the boys get fresh with her” was the sotto voce indictment of Baymiller Street, even back in the days before she had lengthened her skirts, put up her hair and developed to its fullest sense that promise of ‘style’ which had already characterized her as a child.

The gossip hurts her, but she has a sense of balance.  She enjoys being sexy.  She likes the excitement of going out with men, eating and drinking beer at good German restaurants, gambling a little in the back rooms, and she doesn’t mind a little bit of spooning.  She isn’t just a flirt, though:  she has a good business head.  She works at her father’s ladies’ fittings emporium, and has been offered a job in New York.

Kurt, owner of a bicycle shop, wants to marry her, but then she meets Walter Saxel, a gorgeous Jewish man with whom she falls madly in love.  Because of the demands of her scheming, hysterical, supposedly pregnant stepsister, she is late for a date with Walter and misses the opportunity to meet his mother.  And because of the stigma of intermarriage, Walter marries the nice Jewish girl with banking connections his mother has picked out for him.

Six years later when Ray and Walter meet again in New York, they find they are still in love and she becomes his mistress.

Hurst describes Ray’s isolation in a back street apartment.  Although she goes to the races and plays cards with other women like her, she devotes her life to Walter, who keeps her on a tight budget even after he becomes a millionaire banker.  She is anxious about money many times over the years, and one summer when he goes to Europe she dares not contact him to tell him he forgot to leave the check.  The women she sells painted china to are on vacation, she cannot find a job, and she depends on winnings at the races.  She never has any security, because Walter has decided he wants her to live a simple life.

And he is not very bright:  he could not have succeeded as a banker without her advice.  She even writes his speeches.

Her poodle, Babe, takes the place of the children she’ll never have, and, as in all dog stories, well, I won’t tell you, but… poor Babe!

I very much enjoyed this novel.  The writing is good enough, not great, but you read it for the plot and characters.  This is really a pageturner, like Valley of the Dolls without drugs.   Hurst also wrote Imitation of Life, which was adapted for a film.

And now here’s Linda Ronstadt and Chuck Berry, “Back in the U.S.A.”