“I’ve got to get my Lithium adjusted,” my cousin says at a party. 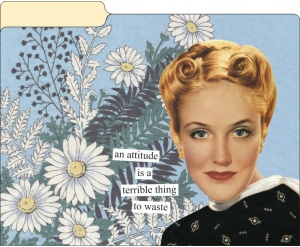 It has thus far been a civilized party. My cousin is always charming for a while, and then she tells stories about her bipolar disorder.  Years ago steroids for an ear infection triggered a manic episode, and she got banned from the grocery store for telling customers the air was poisoned (“and it is,” as she pointed out later). Her  doctor has kept her on psychiatric drugs.  And now she is fat, like all the women in her family.  Yes, it’s the drugs, the genes…you name it.

I suspected it might be a mistake to bring her, but since she decided she was gay two months ago (she’s 39, and none of us believes her), she has been unusually depressed.

“Can’t you muzzle her?” my friend Janet asks.

It’s Janet’s party, and she can cry if she wants to.  She is celebrating her promotion to director of PR at a small charity office. She lives in a tiny town in Amish country, because she can’t afford on her salary to live in Iowa City.  The party is at her mother’s large house in Des Moines, because all of Janet’s friends love to go to Des Moines “to go to Half Price Books,” or “to see the latest musical at the Playhouse.”

My cousin gets into an argument with the attractive, shaggy-haired aficionado of Half Price Books, a physicist, about the condition and quality of books at Half Price Books.

It’s better than the bipolar thing, though.

And then she makes a pass at him.

Being gay for my cousin meant joining a club that could never reject her.  Okay, gayness is accepted now, but they have a heavy-duty support network that I cannot say we have in the heterosexual community.  It’s cool to be gay; it’s just retro to be hetero.  But my cousin has always been boy-crazy.

Janet decides to get competitive, now that the party is under control again.  She describes  the week-long workshop she recently attended at the Summer Writers’ Festival.  She met some great poets, she says, and wrote some good poems there.   But she laughs at the critical words they used for every poem:  “spare,” “signature,” “personal,” and “mythic.”

And then she and her co-workers talk about a creative campaign for the charity.

And then we lose the party to my cousin again.

She recites a poem by Ogden Nash.

I glare at my cousin and say, “We’ve got to go; lovely party.”

One thought on “Lovely Party”