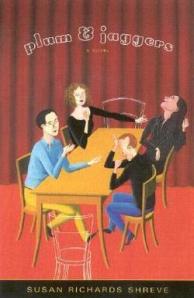 I am not the only reader to discover the Nancy Pearl Book Lust Rediscoveries series, published by Amazon.

But you know what?  I’ve read remarkably little about this series at blogs.

If you love reprints of great out-of-print novels, among them Virago and NYRB, you’ll want to check out this series of reissued forgotten novels.  Each is selected by Nancy Pearl, an award-winning librarian and writer, and each was originally published between 1960 and 2000.

Susan Richards Shreve is one of my favorite writers, but somehow I missed out in 2000 on  Plum & Jaggers, her fascinating novel about four children whose lives are shattered by terrorism.

Shreve is one of those wonderful writers whose style is deceptively simple.  It never gets in the way of her spellbinding storytelling.  Shreve, the co-chair of the board of the PEN/Faulkner Foundation and  founder of the MFA program at George Mason University, has written both adult novels and children’s novels.  And because of her expertise at exploring both children’s and adults’ points of view, she writes a pitch-perfect tragicomedy about this disturbed  family.

Shreve unsentimentally yet movingly portrays the offbeat McWilliams children.  On a train to Rome in 1974, their parents,  hippie former Peace Corps volunteers and world travelers, leave Sam, Charlotte, Oliver, and Julia to go to the dining car to fetch lunch. A bomb goes off, and they are instantly killed.  The children survive, but, as you can imagine, there are severe psychological consequences.  Sam, age 7, the oldest, feels responsible for the others, wanting to keep them together and even insisting they live and work together e as adults.    He forms a comedy troupe called Plum & Jaggers after their parents’ nicknames.   As you can imagine, it is dark comedy.  And for a while it is a show on NBC.

Sam McWilliams was the only member of Plum & Jaggers who remembered the afternoon of June 11 when the first two cars of the Expresso from Milan to Rome explode, killing everyone on board those cars except for a four-year-old French boy and a conductor.  Sam remembered exactly.  He was seven years old, eight in November.  Julia was too young for memory, sleeping in Sam’s arms, where their mother had put her when they left.

After the bomb goes off, Charlotte falls asleep, “a habit she would retain in emergencies for the rest of her life,” and Oliver crawls under the seat upside down. 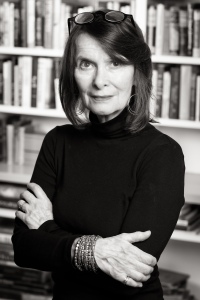 The novel follows their lives from the ’70s through the ’90s. At first they live in Michigan with their beloved grandparents, until Sam is falsely accused of beating up a boy.  Then the family moves to Washington, D.C., ostensibly so Grandfather can pursue his freelance art career at the Smithsonian, but really to escape Sam’s bad reputatuon.  But trouble follows Sam: he is caught stealing a pipe and flashlight from a hardware store: he is building a bomb shelter under the garage.  Because of his previous record in Grand Rapids, Sam is put into a juvenile detention center.  Oddly enough, he has an excellent effect on the other boys.  He writes plays based on the boys’ family lives, and they discover their creative power by acting them out.

The younger McWilliams children are on the surface a little less troubled:  Charlotte can always escape into a book, Oliver is practical and also artistic, and Julia refuses to go to school (her grandmother homeschools her).

Sam, obsessed with the history of terrorism, begins to write dark comedies about their family.  Gradually they develop a following, and NBC picks up the show.   The set is always a dining room with two empty chairs at either end of the table for their missing parents and an unexploded bomb under the table.

But there is a price for fame, and Julia attracts a stalker.  When they gather at a small cafe, it is Olivier who points out that her extreme roles in the troupe are “a magnet for crazy people.”  Ironically, they are dealing with their family situation so honestly that it can attract negative attention.

“I worry about the line of safety we’re crossing,” Charlotte said.

“We have to be careful, though,” Oliver said.  “This is television, not a small theater audience who will have come to see us because we’re Plum & Jaggers.”

“But we’ve hit a funny bone.”  Julia leaned against Oliver.  “I don’t think we should change the show completely.”

“We’re not changing it at all,” Sam said, getting up and putting on his coat.  “I know exactly what I’m doing.”

This small, perfect book actually gave me a chill of recognition, as though I perfectly understood the McWilliams family. I love these characters, and Shreve knows exactly when to distance us from them.  (She doesn’t want us to be a crying mess throughout the book.)   And so I will be searching for more of Shreve’s books.  And I will be rereading Plum & Jaggers  soon.  I’ve got the urge to reread it now, but have more or less promised to wait till next spring.  I can’t be too indulgent about reading the books I love over and over…