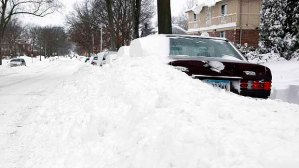 I sat by my mother’s bed on February 1, 2011.  I’d temporarily moved into her house so I could advocate for her at the hospital.

A blizzard shut down the town.  I  plunged into waist-high snow and took tiny steps along icy streets. I was one of the few people–including staff–who made it to the hospital that day.

My sib had wimped out. I sat with my mother and we played cards and watched TV.  She wouldn’t eat hospital food, so I went around the corner to Hamburg Inn and got her a burger.

The day after the blizzard my mother’s best friend Carolyn visited.  She was wearing capris, which didn’t seem appropriate in winter, but occasionally she and my mother got addled.

“Am I beautiful?”  Carolyn had just come from the beauty salon.

I assured her she looked great.  Later my mother told me Carolyn was vain.  I think I got that.  But what cracked me up was there they were in their eighties, still very much like competitive sisters.

Carolyn had left her cane in the hospital shop.  A man brought it up to the room.

My mother said, “You forget it because you don’t really need it, Carolyn.”

My mother was cranky in the hospital.

Carolyn came every day to see my mother. When I rattled off the pulse and blood pressure numbers on the phone, she asked, “Are you a nurse?”

When my sib insisted that my mother have Last Rites, or Extreme Unction, as I’d always called it, Carolyn and I made faces at each other while he fervently crossed himself.  The doctor had assured us she’d be fine after surgery.

As soon as the priest left, my mother held up her hands.  “Can we wipe off the oil?”

Carolyn and I got a bite to eat at the cafeteria.  She caught me up on years of gossip.

When I saw Carolyn at my mother’s funeral last year, she said, “Next time you see me I’ll be in my grave.”

She died last week.  They died within a year of each other.

I missed the funeral.

I didn’t hear about it till too late.

What I’ll always remember is her friendship with my mother.  Carolyn and my mother met in their 20s.  They traveled together by train to Chicago and Lake Okoboji, where my mother met my father.  My mother said she pretended to drink like Carolyn, but she dumped her drinks in plants.  She was very anti-alcohol.  The two were both devout Catholics and daughters of businessmen.   Carolyn and my mother got married within a year of each other.  They talked on the phone every day, sometimes twice a day.  They shopped together and sometimes bought the same outfits.  They played cards together.  They went to movies together.

I have never honestly had a friend like that.   Perhaps if I’d stayed in my hometown, I’d have known the same people all my life.

It’s very sad when the generation ahead of you dies.  I picture both Carolyn and my mother as young women.  I was always fascinated by their gossip.

The great thing for me is that Carolyn let me into their circle near the end.