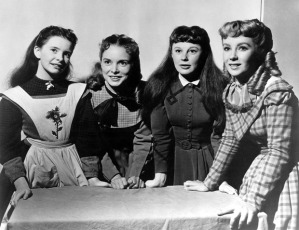 I went to the movies with my mother.

My mother loved classic movies, and whenever there was a revival of Gone with the Wind or Lawrence of Arabia, we arrived at the theater early to hunker down in good seats with our popcorn and Coke.

The most thrilling cinematic experience of my childhood was a Saturday matinée revival of Little Women, the 1949 film starring June Allyson, Janet Leigh, Elizabeth Taylor, and Margaret O’Brien.

“This is an important movie,” my mother said.

I was enchanted by this mother-daughter outing. At seven, I was already a reader-writer like Jo, and, if not quite as tomboyish, strong-willed and a great believer in social justice.  Jo was the one who had adventures, even though she was plain:  I, too, wanted to whistle and interject, “Christopher Columbus!”

Not only did the sentimental scenes of 19th-century family life via Hollywood delight me, but Little Women pushed the boundaries of my moral imagination. When Amy burned Jo’s manuscript, I was stunned by this terrible deed.  But Jo must forgive her.   Sisterhood matters.   If the bond breaks, devastation follows.  Yet all these years later, I still find it unbearable to think of the destruction of Jo’s art.

My mother gave me my own copy of Little Women, and I read everything else I could find by Alcott at the library. Although I have read Little Women countless times, I must admit that An Old-Fashioned Girl is my favorite.  And I often wonder, Why is one so famous and the other not?

An Old-Fashioned Girl is the brilliant, fast-paced, moving story of Polly Milton, whom we first meet as a cheerful, funny 14-year-old country girl who prefers sledding and hiking to gossiping and flirting with boys.  On a six-week visit to  her rich friend Fanny Shaw in the city, the values of her own practical, loving family are offset by the materialism and emptiness of the wealthy Shaw family.  Though Polly comes from a poor family, she is rich in imagination, kindness, and bravery.  Fanny is a typical teenager, who is concerned with the latest styles, hairdos, and boys.  It never occurs to her not to conform.

Although there are morals in every chapter, Alcott’s dashing, humorous voice and vivid portraits of the characters charm us (and, actually, as a child one doesn’t notice the moralizing). Alcott’s wit has me smiling from the beginning, when Fanny coaxes her brother Tom to pick up Polly at the railroad station.  Fanny doesn’t want to ruin her hair-do in the damp.

“Suppose she wears a top-knot and a thingumbob, like everyone else; and however shall I know her? Too bad of Fan to make me come alone!”

Tom can’t find Polly, because he’s expecting someone chic.  But Polly, a fresh-faced girl with curly hair, recognizes him and approaches him.  She is so competent that she has already found a hack to carry her boxes. Tom can’t help teasing her. Even though he likes her, he pretends the driver of the hack is tipsy, so that he will have an excuse to ride up front and eat peanuts.

From the beginning, clothes is an issue for Fanny. She is sometimes ashamed of Polly’s simple dresses, and explains she can’t fit in with Fanny’s set if she isn’t more stylish. When she persuades Polly to buy bronze boots, Polly realizes she cannot buy presents for her family.  With the help of Fanny’s grandmother, she makes presents for her siblings.  And her appreciation of Grandma’s funny stories bring Fan, Tom, and six-year-old Maud into a closer relationship with the neglected matriarch.

On this rereading, I discovered that Polly is a Latinist.  This amused me very much:  do you suppose this influenced my own choice of studies?  (Well, probably not.)  When Tom hurls his Latin book across the room, Polly offers to help.

“I like Latin, and used to get on well when I studied it with Jimmy.  Perhaps I can help you a little bit,” said Polly, as Tom wiped his hot face and refesehed himself with a peanut.

‘You?  pooh!  girls’ Latin don’t amount to much anyway,” was the grateful reply.

Polly’s Latin turns out to be quite good, by the way.

In the second part of the book, Polly returns to the city at the age of 20 to earn her living as a music teacher.  The description of her poverty, of the boredom and repetition of teaching, and her loneliness are very evocative.  One of Polly’s friends is a young seamstress who attempted suicide because of poverty.

I have to say that I love Fanny, who has matured and is a complicated young woman in unrequited love with an admirer of Polly.  Tom is a college student who runs into debt, and Maud prefers Polly’s poor rooms to their huge house.

Then the Shaws go broke….

An Old-Fashioned Girl reads as well as Little Women, and its narrative energy speeds it along.  Alcott’s growing public audience agreed, ordering 12,000 copies before publication and more than 24,000 afterward.  It’s written in simple, unaffected English, which was at the time a revolutionary way of writing that Alcott had really pioneered in Little Women.  In the book, she apologizes for the simplicity of her language, noting that she hopes her readers will not be able to say ‘it’s all very prim and proper, but it isn’t a bit like us.”  Instead, she hopes that the covers of her novel will be the dirtiest in the library.

By the way, Susan Cheever is also the editor of the Library of America’s second volume of Louisa May Alcott:  Work, Eight Cousins, Rose in Bloom, and Stories & Other Writing.  I just bought a copy and will write about it soon.

I loved every moment of rereading An Old-Fashioned Girl.

10 thoughts on “Alcott at the Movies: Why “Little Women” But Not “An Old-Fashioned Girl”?”