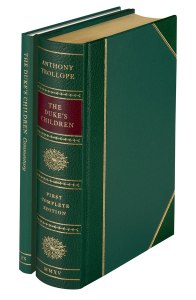 The Folio Society edition of The Duke’s Children

In March 2015, the Folio Society will publish the first complete edition of Trollope’s The Duke’s Children.

The Duke’s Children was written as a four-volume novel, but was cut to three volumes. As the Folio Society tells us, “65,000 words ended up on the cutting-room floor.”  The restored manuscript is published in this limited edition, and a separate volume of scholarly essays and notes is included with the novel

I am excited about the new edition, because  I am rereading Trollope’s Pallisers novels:  Can You Forgive Her?, Phineas Finn, The Eustace Diamonds, Phineas Redux, The Prime Minister, and The Duke’s Children.  If I wait till March to read The Duke’s Children, I can read the Folio Society edtion.

I dearly love the Pallisers books, which I discovered in the 1970s, when the BBC series aired in the U.S.  In those days, mass market paperbacks were often published to complement the TV series.  My set had photos of the actors on the covers.

A scene from the BBC Pallisers series.

Then, in the ’80s, I found a classier set of Oxford editions at a used bookstore. Alas,  I was not very fussy about condition, and I must say these were too well-used.

A set of the Pallisers books.

Now I have the inexpensive Oxford World Classics editions. 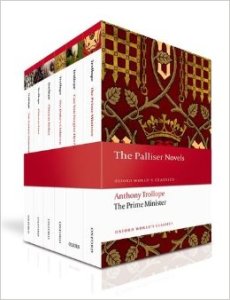 Much as I like the Folio Society books (I recently saw a gorgeous edition of Rose Macaulay’s The Towers of Trezibond at a used bookstore), I am not a collector.  They are beautiful, but expensive.

But perhaps I’ll treat myself to the new The Duke’s Children.  I’m not traveling to London this spring, so this can be the substitute.