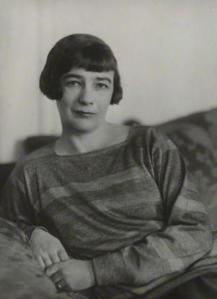 A few years ago in a “Books of the Year” article in The Spectator, Charlotte Moore charmingly recommended Sheila Kaye-Smith’s novels.

My most enjoyable wallow in the past this year has been provided by Sheila Kaye Smith, ‘the Hardy of Sussex’, whose intense human dramas, enacted in a primitive rural landscape about to be forever changed, were satirised in Cold Comfort Farm. Try The End of the House of Alard — the title says it all.

You are missing out on a guilty pleasure if you know the books of Kaye-Smith and Mary Webb only from Stella Gibbons’s Cold Comfort Farm. Although Gibbons’s witty satire is amusing, it destroyed the reputation of these once popular writers for us.

I am a fan of Mary Webb’s Precious Bane, which won the Prix Femina Vie Heureuse Prize in 1924.

I recently curled up with Kaye Smith’s Joanna Godden.  It is not in the same class as Webb’s Precious Bane–the writing is much rougher–but Kaye-Smith’s portrait of a woman farmer is intriguing. 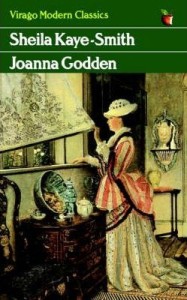 Published in 1921, Joanna Godden chronicles 20 years in the life of a woman farmer.  When Joanna inherits a sheep farm from her father, she scandalizes the neighbors and other farmers by managing it herself.

It is not easy being a woman farmer.  She is snubbed by the other farmers, and has trouble managing her father’s men.  She makes staff changes: she hires a new “looker” for her sheep, partly because he will obey her, partly because she is attracted to him.  After a disastrous experiment with breeding sheep, she realizes her father would never have hired anyone so inexperienced.

The writing is rough, but the story is gripping.

Kaye-Smith’s description of Joanna in the opening pages shows us that she is no “lady.”  She is loud, outspoken, big, and likes frills and plumes.

She was emphatically what men call a “fine woman’ with her firm, white neck, her broad shoulders, her deep bosom and strong waist; she was tall, too, with large, useful hands and feet.  Her face was brown and slightly freckled, with a warm color on the cheeks; the features were strong, but any impression of heaviness was at once dispelled by a pair of eager, lively blue eyes.  Big jet earrings dangled from her ears, being matched by the double chain of beads that hung over crape-filled bodice.  Indeed, with her plumes, her earrings, her necklace, her frills, though all of the decent and respectable black, she faintly shocked the opinion of Wayland Marsh, otherwise disposed in pity to be lenient to Joanna Godden and her ways.

Joanna  becomes the richest, most successful farmer on the Romney and Walland Marshes in Kent.

But what to do for sex?  She wants a relationship, but will not marry anyone who is after her money.   She falls in love, but…

Kaye-Smith also explores the complications of sisterhood.   Joanna is alternately affectionate and violent towards her sly, pretty younger sister, Ellen.  Joanna sends her to boarding school so she can become a “lady,” but when rebellious Ellen comes home, the marshes bore her.

Ellen runs away with a man.  Years later, Joanna, has an unsatisfying romance, and finally faces a problem she cannot solve.

Rachel Anderson writes in the introduction to the Virago edition:  “Popular romantic heroines of the twenties, whether large or small, were uncertain whether they wished to be liberated from man or dominated by him:  to choose true love inevitably meant to choose male domination.”

I enjoyed this book very much, though I won’t lie and say it’s good.  Has anybody else read Sheila Kaye-Smith’s novels?  What else should I read?