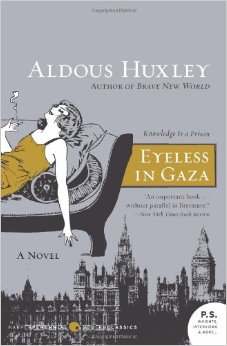 Aldous Huxley’s best-known book is the dystopian classic, Brave New World, but some of us are aficionados of his early comic novels, such as Point Counter Point, a satire of 1920s intellectual life, and Crome Yellow, a charming frothy house-party novel in which eccentric characters exchange outlandish ideas.

In his introduction to Crome Yellow (Dalkey Archive Press), the critic Michael Dirda writes that he prefers the early novels of the 1920s.  He says, “…as the 1920s advance Huxley grew more earnest as a writer and lost his youthful pizazz.”

I am a Huxley groupie–I even read Sybille Bedford’s biography–but I know what Dirda means.   By the 1930s, Huxley was experimenting in his novels with long philosophical musings and tirades on modern life.

I recently discovered Huxley’s witty modernist masterpiece, Eyeless in Gaza, which was published in 1936.  Once I realized it was a serious novel–Huxley is so witty that at first I thought it was a comedy–I became completely absorbed and added this to my list of Huxley favorites.

In this compelling  novel, Huxley explores the vicissitudes of the life of Anthony Beavis, a sociologist who was educated at Oxford.  His emotional detachment began in childhood after his mother’s death.   Eventually, in middle age, he tries to break free of the past that has created his cynicism and dispassion.. 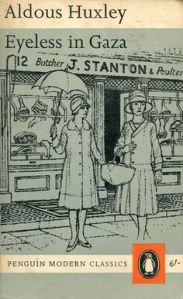 We first meet Anthony as a middle-aged man in 1933, looking at snapshots of his beautiful mother at the turn of the century and of Mary Amberley, the gorgeous, malicious older woman who was his first lover. The trope of the snapshots perfectly introduces Huxley’s experiment with time in narrative.  While looking at the photographs Anthony inhabits several time periods at once.

David King Dunaway’s writes in his introduction to the Harper Perennial edition of Eyeless in Gaza:

The work’s structure was controversial in its time, for this is no ordinary, begin-at-the-beginning narrative.  Broken into six time periods, the narrative cuts across time as though sawed into pieces.  Each time signature is distinct, yet based on what precedes it….  the effect of the time-shifting is fatalistic and oddly moving.

Huxley reveals Anthony’s character through journal entries, traditional narrative, musings, sharp, witty dialogue, and chapters from Anthony’s book. We learn of the usual trials at public school, the joy of life at Oxford, the affair with Mary that ends in the death of a friend, his pacifism, and his relationship with Helen, Mary’s impulsive, socialist daughter.

The same characters crop up again and again.  Anthony’s school friends turn up at parties, sometimes much changed.  Some are heteroexual, others homosexual, and still others asexuall.  In a way, Eyeless in Gaza is a predecessor of Anthony Powell’s A Dance to the Music of Time, in which the same few characters are connected over time to the narrator.

Huxley has the gift of creating a character in a few sharp lines.  In the opening chapter, when Anthony’s lover, Helen, walks into the room, he ignores her and continues to study his snapshots.

Well, here I am, ” she said without smiling.  She pulled off her hat and with a beautiful impatient movement of the head shook back the ruddy-brown curls of her hair.  “Hideously hot!”  She threw the hat on to the sofa and crossed the room to where Anthony was sitting at his writing-table.  “Not working?”  she asked in surprise.  It was so rare to find him otherwise than immersed in books and papers.

In another scene, we see Helen as a young socialist, determined to steal something from every shop she visits with her stuffy sister.  By the end of the novel, she is passionately communist.

Huxley also fills chapters with Anthony’s writings.  In Chapter XI of his Element so Sociology, he analyzes personality and psychology.

Psychologists have no new instruments, only new techniques of thought….To be a tolerably good psychologist was possible, in the past, only for men of genius.  Compare Chaucer’s psychology with Gower’s, even Boccaccio’s.  Compare Shakespeare’s with Ben Jonson’s.  The difference was not only of quality, but of quantity.  The men of genius knew more than their merely intelligent counterparts.

Isn’t that the truth?

If you don’t have patience to read about Huxley/Anthony’s analysis of modern life, this novel is not for you, but I thoroughly enjoyed it.