There are some books I read again and again:  Monica Dickens’ The Winds of Heaven, Pamela Dean’s Tam Lin,  Margaret Drabble’s The Garrick Year, and Dodie Smith’s I Capture the Castle. Sometimes a small perfect book can give as much pleasure as a classic.

Angela Huth’s Invitation to the Married Life is another of my favorite rereads.  In this charming novel, which has the feel of a Shakespearean comedy, Huth explores the changing face of love in middle age.  She tells the story of four married couples, two of whom are contented, two wretched.  As they receive invitations to a ball in Oxford to be given by the wealthy Fotheringoes (perhaps the novel’s least happy couple)  in four months, their reactions tell us about their relationships.

Rachel Arkwright, my favorite character, a neglected wife and mother of two grown children, opens the invitation at breakfast while she is waiting for her irritable husband, Thomas, to go to work. She must open letters quietly and turn pages slowly so as not to disturb him, but is so excited about the invitation she forgets.

There he was, a caricature of a husband, almost completely hidden–guarded against her–by the Daily Telegraph (he had presently switched from The Times).  Two pinkish blobs of fuzzy-backed hands held the pages wide open.

When she opens the invitation and asks Thomas if she should accept, she is suffused with joy when he ungraciously says,

I suppose so.  You obviously want to go.  Though what the middle-aged want to give balls for I can’t imagine.  A more ridiculous way of spending money–“

Rachel has a secret life:  she sleeps every afternoon in her beautifully-refurbished bedroom with its soft bed and expensive linens.  She has a degree in law, but here is a woman who has her priorities right. The nap rejuvenates her, and makes her happy.

Thomas thinks parties for the middle-aged are absurd because he does not find middle-aged women attractive:  he is fixated on younger women, and has no idea that he has grown fat and less attractive to the young.  Planning to break up with his current girlfriend, he wanders into an art gallery and falls for an etiolated young woman who rejects his advances.  But  she is the daughter of the artist, R. Cotterman, whose paintings he buys, and she sends him to her mother’s house.  He is determined to fall in love with Rosie Cotterman before he even meets her.

Mary and her husband Bill, a retired naval man obsessed with time tables, are busy with the upkeep of their country house and the woods.  They are happy with their quiet life, and Mary is not excited about the party.   But Bill insists that she must go to London for a new dress, and reminds her that they can stay at their  daughter Ursula’s in Oxford. When Bill dies and Mary attends the party with her neighbor, Rosie, everyone supposes she must be devastated. But Mary is still happy and peaceful, and is relieved to know that she can continue living happily on her own. 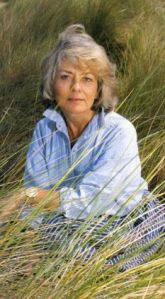 The gorgeous Ursula needs the party less than anyone.  She has a perfect life:  she is madly in love with her husband, Martin, an Oxford don,  is the mother of two charming children, and has a friend, Ralph, who believes he is in love with her. Ursula likes her work as a garden planner, though she must compromise with clients who know nothing about nature.   There is just one flaw in her happiness: she hates living in Oxford, and her husband, who works there, sees no reason to move. And then she is often annoyed by Ralph’s lovesick puppy-dog manner.  She teases Ralph,

You know why I think Frances has these parties?  Apart from something to do?  Her real reason is so that she has a chance to dance with you.”

No man and woman can be less compatible than Toby and Frances Fotheringoe. Toby is a computer genius and a nature lover who watches badgers at night in the woods. Frances is a very lonely woman who plans parties to have something to do and to be noticed.  She pays almost no attention to her daughter.  She wants very badly to find some kind of work, perhaps as a designer in the theater.  But at the party itself, she will hook-up with the band leader, who thinks he can find her work as a party planner.  And as for Toby…well, we don’t see that coming.

Who belongs with whom?  Some of the answers are quite surprising.  A ball in middle age shakes people up just as much as it does in youth.

Well, I don’t actually know.  I’ve never gone to a ball, have you?  But I do like Rachel’s reaction.  She finds a bed in a spare room and curls up and goes to sleep.

Rachel has a chance of happiness…

10 thoughts on “Angela Huth’s Invitation to the Married Life”