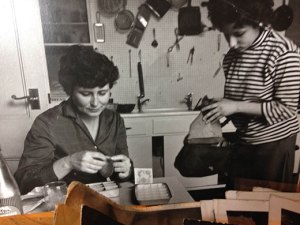 Someone kindly gave me a subscription to the London Review of Books this year.

It is a very male-oriented publication. I read an appallingly misogynistic article about Hillary Clinton. (They might respect her if they did not call her “Hillary.”)   But I have read with great interest Jenny Diski’s column, particularly her memoirs of Doris Lessing.

Diski, a brilliant memoirist and novelist, lived with Doris Lessing for several months in 1963 after she was expelled from boarding school. There were good times and bad times–she met many famous writers–but how did she know Doris would not kick her out?  Everyone else did. 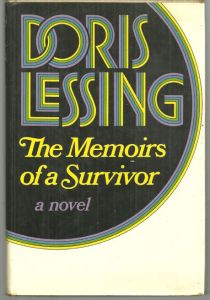 Eleven years later,  Diski had the disconcerting experience of finding herself a character in Lessing’s  The Memoirs of a Survivor.

Let me say here that Lessing is my favorite writer. The Golden Notebook and the Martha Quest books influenced the course of my life.  These books are oxygen to me.  I also love her dystopian fable, The Memoirs of a Survivor.

In The Memoirs of a Survivor, the narrator describes the disintegration of society by food shortages and power outages. The “memoir” describes a future  of regression and barbarism, but it is also a reminder of techniques of off-the-grid survival. (Gangs, barter, and flea markets are important.) The future may be most difficult for those of us who remember civilization, Lessing hints.

I also read Memoirs as Lessing’s psychological memoir, and the character Emily as a doppelganger of the narrator’s younger self.

Diski says Emily is based on her..

Memoirs of a Survivor was published in 1974, 11 years after I began to live with Doris. She gave me a copy of the novel, as she did every one she wrote. It was inscribed ‘To Jenny love Doris 25/11/74’. It made familiar and disturbing reading. I could see Emily in me, just as I could see my elderly neighbour’s description of me aged three. It is as accurate a reading of me as Emily’s harsh commentary on others. It is true, but it is, of course, a doubly edited version, a view of me from the narrator’s point of view, which itself has been taken and worked for fiction’s purpose from Doris’s point of view. If there is pity in the narrator’s response to Emily, it is strained for. I discovered after a while that Doris had a habit of describing people in fiction and in life as, for example, ‘heartbreaking’ in her most distant, coolest tone, as if to mitigate her dislike of them. She saw it as being fair, I think.

The truth of the matter is, no one wants to be a character in someone else’s novel. I do feel sympathy for Diski, who was hurt by Lessing’s portrayal.   But perhaps Lessing was also writing about herself as Emily.   And I myself thought the portrait of Emily was compassionate.

Living with Lessing sounds relatively heavenly to me. When I was a  teenager, a lesbian teacher installed me in her house and seduced me.  I was always having to pretend I was 18 so she wouldn’t be arrested.  When I moved out, she stood on the curb outside the house where I had a room and yelled, “I hope it hurts like hell when you screw.”

Of course I’m fascinated by Diski’s memoirs (I  loved Skating to Antarctica), but Lessing’s are more fascinating.  I look forward to the third volume of Lessing’s autobiography, if she ever wrote it and if it is published. 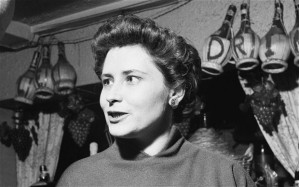