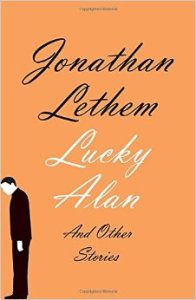 I have read some remarkable collections of short stories this year.

The best is Jonathan Lethem’s Lucky Alan and Other Stories.

Readers of this blog will know that Lethem is my favorite American writer.  His genre-bending fiction ranges from realism to realism laced with magic realism to science fiction and noir.  And he won the National Book Critics Circle Award in 1999 for Motherless Brooklyn, a novel about a detective with Tourette syndrome.

I read these brilliant stories in one sitting.  In my favorite story, “Lucky Alan,”  the narrator, Grahame, an actor, goes every day to the movies, where he keeps running into Blondy Sigmund, the “legendary” theater director. Sometimes they go to wine bars after the film, sometimes months go by without their seeing each other. When Grahame realizes that Blondy has left the neighborhood, he tracks him down.  Blondy tells the story of why he left his rent-controlled apartment, which centers on a geeky neighbor named Alan.

Lethem’s flamboyant writing is laced with buoyant humor. Here is a quote from “Lucky Alan.”

If this multiplex-haunting practice didn’t square with Blondy’s reputation as the venerated maestro of a certain form of miniaturist spectacle (Krapp’s Last Tape in the elevator of a prewar office building, which moved up and down throughout the performance, with Blondy himself as Krapp, for cramped audiences of five or six at a time, it didn’t matter, since that reputation hardly thrived.

In “Traveler Home,” a kind of dark fairy tale, Traveler, who has moved to the country from the city, waits for the Plowman to dig him out of a snowstorm. He hears wolves howl, and finds a baby in the woods. Is this somehow related to the Plowman’s eccentric,, slightly witchy daughter?

One of my favorites is “The Empty Room,” in which the volatile father of an eccentric family insists that one room in their big house be designated “the empty room.”  It becomes a running joke, and the kids’ friends like to visit it after school. The empty room has a sign-up sheet, but gradually splits the parents as they pursue divergent interests..

“The Dreaming Jaw, The Salivating Ear” is a  clever horror story about a psycho blogger.  Oh, dear, why don’t writers like bloggers?!  Lethem writes:  “It was the Whom I tried to keep out and the Whom I laid low with a single remorseless thrust with the blunt editorial object I had carried with me hidden on my person and with which, gripped knuckle-tight, I lay in wait inside the entranceway of my blog.” I’m sure non-bloggers will appreciate this one more than I did.

“Procedure in Plain Air” is a surreal masterpiece.  The umemployed Stevick, whose excellent severance package has slowed his job hunt, is drinking coffee on a bench when two men in jumpsuits jump out of a truck, dig a hole, and lower a bound-and-gagged man in a jumpsuit into it.  When the men get ready to go, Stevick complains that the boards over the hole won’t keep the rain out, and is handed an umbrella.

All of these stories are excellent, and a good introduction to Lethem’s work if you don’t know it.

4 thoughts on “Jonathan Lethem’s Lucky Alan and Other Stories”