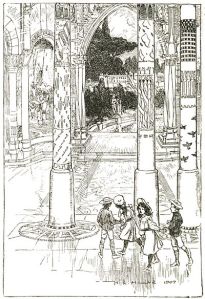 E. Nesbit was my favorite writer as a child, and my favorite book was The Enchanted Castle.

One of the pleasures of having an e-reader has been discovering Nesbit’s out-of-print adult books.

I just finished The Lark,  a delightful comedy published in 1922. 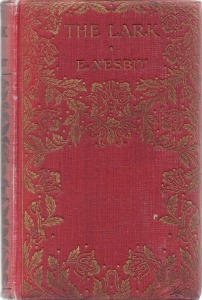 In The Lark, Nesbit’s last book, she immediately establishes a quasi-magical atmosphere reminiscent of her charming children’s novels. She combines witty dialogue with comic sketches of work and dreamy descriptions of gardens in this compelling story of two young women struggling to make a living selling flowers from their garden. 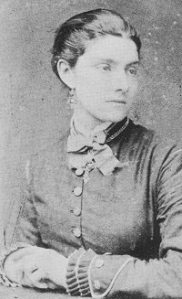 The main characters, both orphans, Jane Quested and her cousin, Lucilla,  are 15 and visiting their friend Emmeline when we meet them in the opening chapter. In the library they find a spell book, a “fat quarto volume with onyx-laid clasps and bosses,” and the adventurous Jane decides it will be “a lark” to try the spell that will reveal her true love.  (Everything is a lark to Jane.)

The novel is also a comic riff on the romance between Jane Eyre and Mr. Rochester.  Jane is looking lovely and saying her spell in the woods when Mr. Rochester, a handsome man who has missed his train, wanders by.  Their eyes meet.

Will Jane see him again?  Yes, a few years later, when Jane and Lucilla’s guardian loses their money and flees to South Africa, he arranges for them to be picked up from school and taken in a cab to a tiny charming cottage that is the last of their inheritance.  They begin to sell flowers from their garden, because it is all they can think of to do.

Before I go on, I must fill you in on E. Nesbit’s background and fame as a children’s writer.  Her adult books are little-known.

In 1963, Gore Vidal wrote an article, “The Writing of E. Nesbit,” for The New York Review of Books:

After Lewis Carroll, E. Nesbit is the best of the English fabulists who wrote about children (neither wrote for children) and like Carroll she was able to create a world of magic and inverted logic that was entirely her own. Yet Nesbit’s books are relatively unknown in the United States. Publishers attribute her failure in these parts to a witty and intelligent prose style (something of a demerit in the land of the free) and to the fact that a good many of her books deal with magic, a taboo subject nowadays.

Edith and her husband, Hubert Bland, were socialists and members of the Fabian Society.  To support her husband and five children, Nesbit wrote children’s books.  She also supported her best friend, Alice, who had an affair with Hubert, had two children by him, and became Edith’s housekeeper and secretary.  A. S. Byatt’s wonderful novel, The Children’s Book, is based on E. Nesbit and her circle.

In The Lark, Jane and Lucilla have sold most of the flowers from their own garden, and wish they could rent the deserted house with a huge garden down the road. When they find the door open one day and decide to explore, Jane falls and turns her ankle.  Mr. Rochester, who is the landlord’s nephew, shows up and take the two girls home in his carriage.    He is smitten with Jane (but we knew that) and arranges for his cranky uncle to allow them to sell the flowers from his garden.  They open a shop in a shed, hire a gardener, and eventually are given the use of his house, where they take in lodgers (which is very, very funny).

One of the things I like most about the book is the young women’s inability to do math.  (That’s why I can’t open a bookstore.)

“I think it’s the garden distracts us,” said Jane, looking towards the open window, beyond which lay lawn and cedars bathed in moonlight and soft spring air.

I adored this book.  It is utterly charming, if a little rambling with its authorial asides (which I loved) and occasional slapstick scenes. But  I love novels about work, and though this isn’t entirely realistic–could someone please give me a garden?–I love the characters, appreciate the poetic descriptions of flowers, and the burglar episode reminds me of her Bastable books.

Alas, it is only available in the Delphi Classics e-book, The Complete Novels of E. Nesbit.  This only  costs a couple of dollars, and I urge you to try it if you are a Nesbit fan.  The Lark seems a perfect book for a print publisher to revive.

The e-reader certainly has its uses!