Reading in bed has always been my thing.

When you read in the supine position, as Laurie Colwin called it, paperbacks are the perfect weight.  They are light and flexible. The spine of your Oxford paperback of War and Peace will not crack as you rest it lightly on your raised knees. On the other hand, a hardcover of War and Peace is unwieldly.

I fell in love with paperbacks as a girl in the ’60s.  Who could resist the Ballantine paperback editions of Lord of the Rings? Or the Gothic love scenes depicted on the mass market covers of Wuthering Heights?

I do have my share of hardcovers. I own first editions of Ann Beattie, Raymond Carver,  Margaret Drabble, and others whose books I bought when  new.  But I am not a collector: I can take or leave limited editions.   I am still gobsmacked by the idiocy of my spending $330 on the complete edition of  Trollope’s The Duke’s Children (my shocking introduction to The Folio Society). I am oblivious to the allurement of leather covers et al  but I wanted the complete text.

Anyway, I was sorting a few quasi-collectible yet affordable hardcover volumes and decided to take some snapshots. 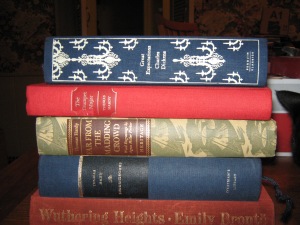 I was startled when I pulled my copy of Hardy’s The Trumpet Major off the shelf and realized it was a Folio Society book.  I bought it at a used bookstore years ago, because I loved the  beautiful engravings by Peter Reddick.   I characterized it a “book-in-a-box club” book.

Below is a photo of an illustrated page from The Trumpet Major.  It’s a lovely, slightly tall red book with beautiful creamy paper and crisp print. . 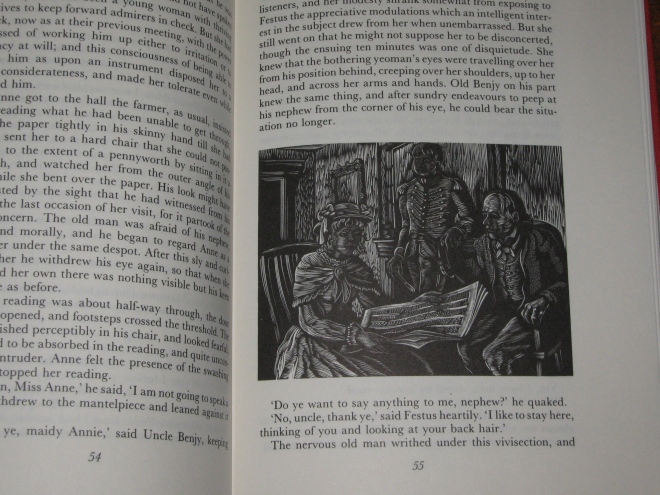 The photo is a little dark, isn’t it?

My Heritage Press copy of Far from the Madding Crowd has an introduction by Robert Cantwell and engravings by Agnes Miller Parker.

Below is an illustration of Bathsheba Everdene carrying a pail.

We all have to reread Far from the Madding Crowd to get ready for the new movie with Carey Mulligan.

I loved the Julie Christie movie, did you?

I  also have a much-read Heritage Press edition of a novel that never makes a good movie, Wuthering Heights. 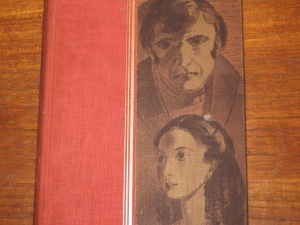 The color lithographs by Barnett Freedman have a curiously modern Y.A. air. There are Catherine and Heathcliff  in all their rock-and-roll splendor as they stride across the moor. All they need are tattoos and piercings.

Penguin hardback classics and Everyman hardbacks are an inexpensive, sturdy, and attractive alternative to paperbacks or collectible hardbacks..

I love my Penguin hardback of Great Expectations and my Everyman of Buddenbrooks.  No illustrations, though.

Are you a hardback or a paperback person?  And do you collect any books?

8 thoughts on “Reading in Bed: Paperbacks vs. Hardcovers, & Quasi-Collectibles”