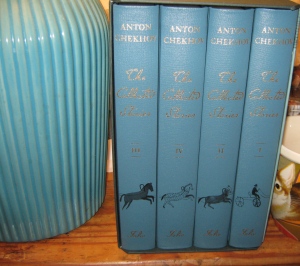 This Folio Society boxed set of The Collected Stories of Chekhov matches my lamp from Target!

Paperbacks are perfect for reading in the horizontal position.  I love my Penguins, Picadors, and Nancy Pearl Book Lust Rediscoveries.

Commenters at this blog, however, recently mentioned that used editions of the Folio Society books are available at eBay.

I do not frequent eBay.  I was once outbid for a mid-twentieth-century blond wood dining room table I wanted for a desk. But  many eBay dealers do sell for a set price. And so I browsed and bought this gorgeous Folio Society set of Chekhov’s The Collected Stories.  The four books are very slightly oversized, but perfectly manageable for reading in “my nest.”

Published in 2010 to celebrate the 150th birthday of Chekhov, the books are beautifully bound and illustrated by Laura Carlin. 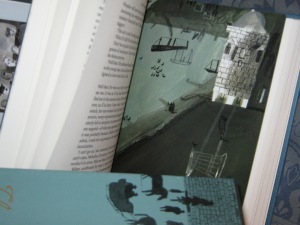 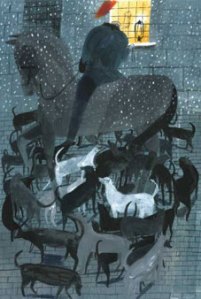 The translation is by Ronald Hingley, who translated nine volumes of Chekhov’s plays and six volumes of his stories for Oxford University Press.  I have tried the Constance Garnett, and hope Hingley will finally illuminate Chekhov for me.

In the introduction, James Lasdun explores the alluring brevity of Chekhov by comparing him to three epic novelists of the 19th century and early twentieth century..

The canonized writers of the past have a tendency to assume a fixed expression in their readers’ imaginations.  Dostoevsky always appears in the same aura of morbidly enthralling hysteria; Proust in the same velvety atmosphere of hyper-attuned sensory receptiveness.  To think of Tolstoy is to conjure, at once, the note of impassive grandeur as of creation being set out in glittering ranks for inspection.

Anton Chekhov, whose short career was as momentous as any of these, has his own distinct tone and manner, but the impression it leaves is curiously elusive, offering reticence and hesitation in place of ‘personality, and a series of mods rather than a discernible attitude to life, even the attitude of uncertainty.

I look forward to reading The Collected Stories and will report back in a few weeks.