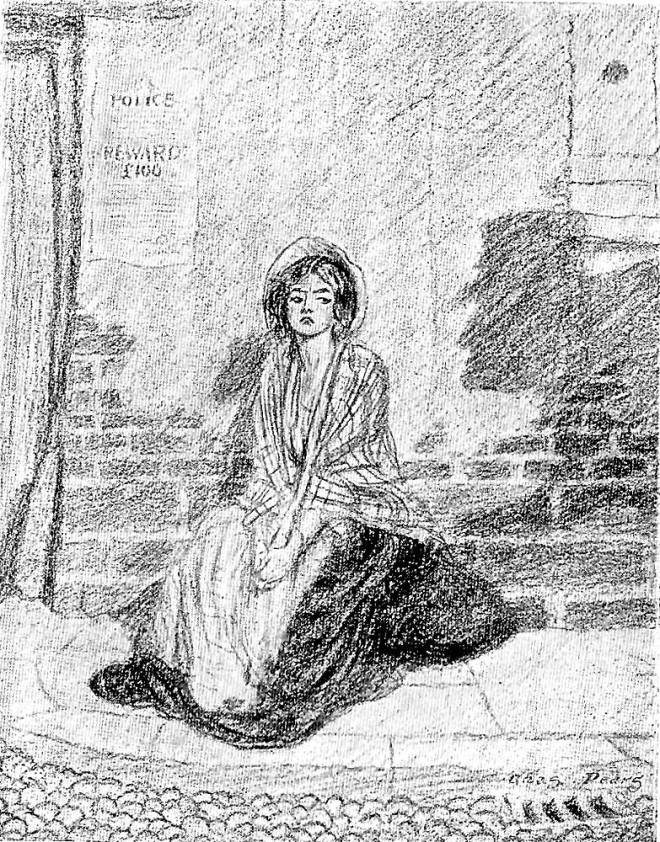 I love the long, ambitious, intricately-structured novels of the nineteenth century.  And I am an ardent admirer of Dickens, whose novels are dark social satires, yet are also comedies and sentimental comfort reads.

I have read so much Dickens–my favorites over and over–that I superimpose his dark foggy smoky London on the modern city.  Wandering around Bloomsbury to find the Charles Dickens Museum on Doughty Street, I felt like one of Dickens’s purposeful, domestic females, my British Museum bag slung over my arm instead of a marketing basket. (Perhaps I was thinking of Esther Summerson or Little Dorrit.) And a-marketing I did go, because  I purchased books in the museum shop. 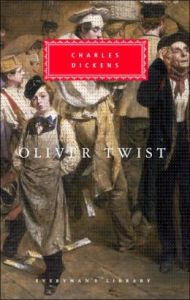 But I recently reread Dickens’s superb second novel, Oliver Twist, and I have been thinking of Nancy, a clever but undomestic female character.  Nancy, a prostitute raised by a gang, eventually saves the orphan OliverTwist from a life of theft,  burglary, and violence.  Fagin, “a Jew” (yes, the nineteenth-century stereotype), is an elderly gang leader who trains children to pick pockets.  He takes special pride in his attempts to corrupt Oliver, who, though raised and starved in the workhouse, is a naturally sweet boy, and, indeed, we later learn that Fagin has been paid to turn him into a criminal by a not-so-gentle gentleman..

Nancy’s loyalties are complicated, and when Oliver escapes from Fagin, she helps the gang track him down.  But when he escapes the second time, after he is shot during an attempted burglary organized by others,  Nancy has a bad conscience.   She contacts Rose Maylie, who with her aunt has rescued Oliver, and passes on information that the gang plans to kidnap him

Nancy is a a victim of Battered Woman Syndrome, though that is probably not how Dickens thought of her.  Her boyfriend is Sikes, a criminal who abuses and beats her, and poor Nancy, who has no one else to love, insists on returning to him, despite Rose’s pleas.  When Sikes learns she has betrayed him, he murders her by beating her with his pistol.

She staggered and fell: nearly blinded with the blood that rained down from a deep gash in her forehead; but raising herself, with difficulty, on her knees, drew from her bosom a white handkerchief — Rose Maylie’s own — and holding it up, in her folded hands, as high towards Heaven as her feeble strength would allow, breathed one prayer for mercy to her Maker. 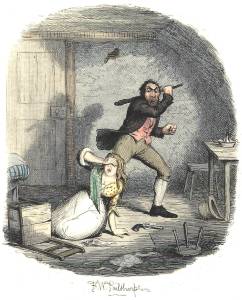 An ngraving for Oliver Twist by F. W. Pailthorpe for the 1838 three-volume Richard Bentley (first) edition.

[Nancy’s) terrible murder, a scene which engaged Dickens’s intense imaginative commitment during his public readings in the last year of his life, can be construed as the punishment of a whore, whose good intentions and good works cannot save her.  For the modern reader it invites another interpretation, as the rendering of the violence men do to women through direct acts of physical brutality and through the kind of sexual relationships and fantasies epitomized by prostitutes where men hold the money and the power.

This is such a remarkable novel: the characters are vivid, the plot is unusually taut, and it exposes the inhumanity of the workhouse and the perils of the London streets.   Not, of course, as good as David Copperfield, which treats similar themes, but a very good read.