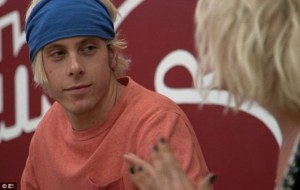 I dropped out of ballet after I got the coveted ballet slippers.

I could not claw my way out of an imaginary box in modern dance.

But here’s a fun fact:  I love Dancing With the Stars.

Millions of overweight potato-chip-chewing non-dancers like myself are addicted to Dancing With the Stars. Every Monday night I sit for two hours in front of this strange Broadway-esque Ballroom-Contemporary Dancing competition.  Then I talk about it all week to my husband, Who Just Doesn’t Care.

1.  There is always an Olympic athlete on the show. The graceful Gold Medal-winning ice dancers, Meryl Davis and Charlie White, competed on Dancing With the Stars in 2014 and Meryl won.  This season Nastia Liukin,  a Gold Medal-winning Olympic gymnast, is breathtaking.

2.  It is  fun from the couch to gently mock the stars you haven’t heard of.   But then you realize that Riker Lynch (a rocker-actor who is in a band and was on Glee) is one of the most elegant dancers. Rumer Willis, the actress daughter of Demi Moore and Bruce Willis, is Another One to Watch. And I like her name.  She was named after Rumer Godden, one of my favorite writers.

3.  Even bad dancers improve.  Yes, the likable Chris Soules of The Bachelor was THE worst dancer this season, but he improved, and of course his pro partner Witney was his rock.  I’m glad he got eliminated, though, because better dancers were getting voted off the show. 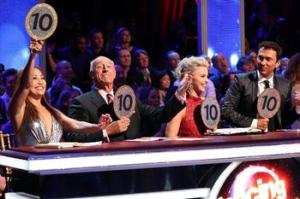 4.  The four judges will teach you what to look for (connection, footwork, emotion, etc.).  Well, you sort of get the hang of it.  Carrie Ann is a creative madwoman who is passionate about dance,  Len, the 70ish Englishman, is very strict, Julianne Hough, a former pro on DWTS, is one of the gentler, more unpredictable voices, and Bruno is the most dramatic and eloquent.  (Actually, he and Carrie Ann are tied for drama and vocab.)

5.  The pro dancers are fascinating.  We don’t learn much about them, but we see them working with their partners in the studio and soothing their tears and encouraging them to get back on the ballroom floor.

6.  The most frustrating aspect about judging is the so-called America. Yes, “America” is one of the judges.  After the show viewers can call or tweet to vote for their favorite couple .These scores are factored into the judges’ scores. The results can be pretty weird, as popular people stay on the show and the talented are voted off.   I can only hope  “America” doesn’t go all militaristic and send gallant Noah, a former solider who lost a  leg and arm in  battle, to the finals..   I was touched by his dance, but then he did this weird thing. He dropped to his knee and proposed to his girlfriend.    I consider marriage proposals  a “don’t” during a dance competition.  Or am I just being a snob?

THIS IS THE BEST SHOW EVER.  REALLY!  Don’t call during the show because I won’t answer it.  Maybe we should place bets with a bookie on win, place, or show–not that I remember what that means.