What am I reading this summer?

Pretty much what I always read.

But who doesn’t like a list?  There are  Best of the Year books in December (the serious books for serious readers and gift-givers) and Summer Reading (the lighter books) in May and June.

Now I don’t promise that the books on my list are lighter or heavier than usual, but here are seven recommendations.

1.  I learned about Holly LeCraw’s stunning novel, The Half Brother, through Nancy Pearl’s recommendations of “under-the-radar reads” at NPR.

And this taut, beautifully-written, realistic novel is perhaps the best new book I’ve read this year.

LeCraw’s brilliant, lyrical style captivates us from the beginning as Charlie, the teacher narrator, takes a walk on the beautiful grounds of his school in  Massachusetts.

Mid-August.  On the quad, the only sound is a far-off angry machine, a leaf blower, somewhere in the vicinity of the library.  Otherwise I’d have the whole place to myself, except for the bees.

Charlie, who went to Harvard only because his stepfather in Atlanta arranged it, was relieved to find a job teaching English at Abbott, a boarding school in New England.. This talented teacher wins his students’ respect not only by his insights into Donne and F. Scott Fitzgerald, but by his Southern charm and old-fashioned habit of addressing them as Mr. and Miss.   When he falls in love with his former student May, the daughter of the chaplain, everything clicks into place.   Then a family secret causes him to break off the relationship.  Ten years later, when  his beautiful golden brother, Nick, is shattered physically and mentally by an experience in Afghanistan, and  comes to Abbott to teach, the dynamics at Abbott change for Charlie, May, and the students.

Charlie is an absolutely believable character:  I have known many dedicated teachers who take jobs at demanding private schools and stay on.  The only unrealistic detail seems to be that he doesn’t struggle to support himself on the salary.  (Private schools pay less than public schools.)

2.  Kelly Link’s Get in Trouble.  Last winter I was bowled over by Link’s  brilliant collection of short stories  but never got around to blogging about it.  It is impossible to categorize Link:  does she write literary fantasy?  Magic realism?  Horror?  Science fiction?  She is so good that her books have burst out of the science fiction ghetto and are reviewed at The New York Times and The Guardian (though not at The New York Review of Books and the TLS–yet!)

It has been a while since I read this, so here is a summary from Goodreads:

In “The Summer People,” a young girl in rural North Carolina serves as uneasy caretaker to the mysterious, never-quite-glimpsed visitors who inhabit the cottage behind her house. In “I Can See Right Through You,” a middle-aged movie star makes a disturbing trip to the Florida swamp where his former on- and off-screen love interest is shooting a ghost-hunting reality show. In “The New Boyfriend,” a suburban slumber party takes an unusual turn, and a teenage friendship is tested, when the spoiled birthday girl opens her big present: a life-size animated doll. 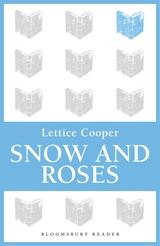 3.  Lettice Cooper’s Snow and Roses.  A fascinating novel about a lecturer at Oxford whose love life literally breaks her down.    Flora’s married lover dies in a car accident after she fights  with him about his plans to move away with his mentally ill wife (whom Flora very much resents).  Her heartbreak is stark and tragic, and since everyone except Hugh’s wife knew about the affair, all know about her mourning.   A gay man suggests she spend a summer in Italy with his sister, a lesbian with whom she falls in love.  AS you can imagine she is utterly shattered when it doesn’t last.  This novel is about picking up the pieces.

Some of you may know Lettice Cooper from Fenny (Virago) and The New House (Virago and Persephone).

4.  Lily King’s Euphoria.  I enjoyed this book very much last year, and it is now in paperback.  King’s early novels struck me as only so-so, so I was astonished by the complexity of Euphoria, obviously her breakthrough book.  The heroine, Nell Stone, the ­controversial American author of the best-selling ethnography “The Children of Kirakira,” is based on Margaret Mead.  The cover jacket copy calls Euphoria “a breathtaking novel about three young anthropologists of the ’30s caught in a passionate love triangle that threatens their bonds, their careers, and, ultimately, their lives.”

5.  Nick Hornby’s Funny Girl.  This is one of Hornby’s lighter books, but there is no such thing as a too-light Hornby.  Given Hornby’s new avocation as a screenwriter, I was not surprised that he set this novel in TV comedy of the 1960s.    The down-to-earth  heroine, Barbara Parker, who changes her name to Sophie Straw, flees to London after winning a beauty contest to become an actress when she realizes she doesn’t want to make appearances for the Chamber of Commerce.   In London she breaks into television, and a daring new BBC sitcom,  “Barbara (and Jim,)” about a young married couple’s ups an downs, is written partly at her suggestions..  Through her career, Sophie only gets nicer, but the  novel also follows the lives of her brooding, jealous co-star, Clive Richardson (too charming for his own good),  the two writers , Bill Gardiner and Tony Holmes, who eventually split, and the earnest director, Dennis Maxwell-Bishop.  This books is not as great a joy as Hornby’s rock and roll novel, Juliet, Naked, but I loved it anyway.

6..  ON THE LIGHTER SIDE.  Susan Wittig Albert is best known for her mysteries, but in this fast-paced historical novel she  she  explores the life of Rose Wilder, Laura Ingalls Wilder’s daughter.  This will intrigue fans of the Little House books. Rose, a successful novelist and journalist, rewrote her mother’s novels from Laura’s notes .  Until the crash in 1928, Rose did very well financially, but during the Depressions she moved back to her parents’ home in the Ozarks with her companion.  (This book is one of many in progress, but I can attest that the first third is fascinating.)  Why didn’t they make their collaboration public?  All will be explained.

7.  Virgil’s Aeneid.  You knew this was coming.  Every summer I tell people The Aeneid is the perfect beach book.   Let’s say we meet on the shore in August and I’ll read aloud parts in Latin, then you can read the English, or, wait, I’ll TEACH YOU SOME LATIN AS WE GO ALONG.  You don’t like the sound of that at all?

Here are the opening lines of Dryden’s translation

Arms, and the man I sing, who, forc’d by fate,
And haughty Juno’s unrelenting hate,
Expell’d and exil’d, left the Trojan shore.
Long labors, both by sea and land, he bore,
And in the doubtful war, before he won
The Latian realm, and built the destin’d town;
His banish’d gods restor’d to rites divine,
And settled sure succession in his line,
From whence the race of Alban fathers come,
And the long glories of majestic Rome.