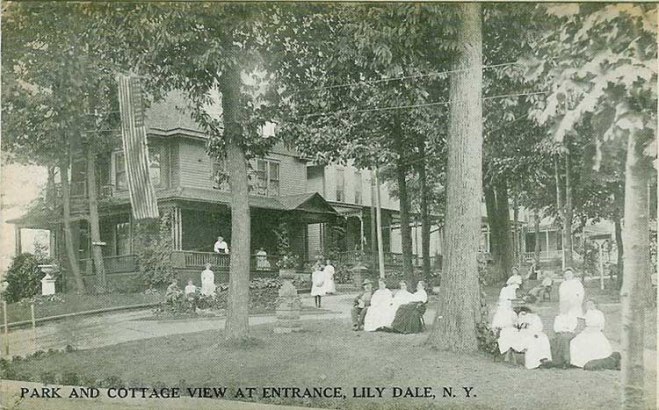 Nobody likes my astrological chart.

I am slightly psychic.

I should live in Lily Dale, New York, a town of psychics, spiritualists, and mediums.  It is where the Fox sisters lived.

“Get me out of here,” I said when we drove through there

A very literary classics professor once gave us a handout of excerpts from English literature.  We had to identify styles, i.e., the running style, the periodic style, and the pointed style.  I also scribbled the names of the authors in the margins:  Virginia Woolf, Henry James, F. Scott Fitzgerald,  etc.

“How did you know that?”  None of his students had ever identified the authors.

It was like identifying a favorite song (except I am tone-deaf, so I can only do this with language.)

My fellow classics students did not read novels.  They read about archaeology and history.

In my free time, I read novels like mad.

I have always had an affinity for language.

Knowing Latin, a language of ghosts, can be eerie.

It makes you intuitive.  Words are arranged differently.  Nobody knows how it sounded.

And so it has happened that I have conversed with my mother’s ghost to exhaustion for two years.

There was an odd event at the funeral.  The priest shook the censer as he walked around her coffin.  The rope broke and the incense burner and bells flew off and crashed.

Nobody talked about it at the burial service.

It was her poltergeist.  It only appeared once, thank God.

I kept trying to imagine what had happened to her. Why was she here every day?  What did she want me to remember?  Why, why had she said the sixties were the best time of her life?  Was she so unhappy?  Was she too alone?  After the sixties: husband gone, her mother died, working at a job that gave her a heart condition (housewife was the ideal job for her), collecting things, watching  too much TV, years of playing Bridge, aging, getting sick, then clapped in an assisted living facility which couldn’t take care of her,  landing in the hospital three times, an eventual intercession to get her into a safe place.

The sixties were such a short time.

And so I’ve gone over it again and again.

So many scenes, good and bad.  Picking up apples in the yard, sitting on the stoop in the shade of the willow tree, laughing, going to movies, shattered by divorce, then becoming brisk, our attempts to converse as we got older.  We went to movies because we both liked movies.  (She fell asleep at Pollock; laughed at Bridesmaids.)

There were some sad times at the nursing home.

She was happy, though.  But she would rather have had the married life.

She said (says) it was all good.

I  recently put plastic flowers on her grave.   She preferred plastic. Once, when she was very old, she tugged her cheeks up like a facelift and said, “See how good I’d look?”

I  am not making fun of her at all.

The women in our family suffer.

It is a plastic culture.  She knew that.

Her ghost left me.  She knows I know who she is.

What a long, strange trip it’s been.

Like all things, this leads to Jerry Garcia and The Aeneid.

Two gates the silent house of Sleep adorn;
Of polish’d ivory this, that of transparent horn:
True visions thro’ transparent horn arise;
Thro’ polish’d ivory pass deluding lies.
Of various things discoursing as he pass’d,
Anchises hither bends his steps at last.
Then, thro’ the gate of iv’ry, he dismiss’d
His valiant offspring and divining guest.