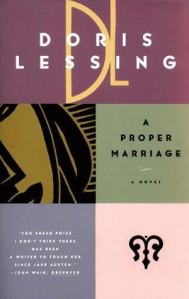 Doris Lessing is my favorite writer, and I like periodically to reread her work.  I have decided to reread the Children of Violence series.  I am starting with the second volume, A Proper Marriage.

Many of you know these as the Martha Quest books.  Indeed, that’s how I usually refer to them.  But Martha and her generation are indeed children of violence:  Martha’s father fought in World War I and her mother was a nurse who met him in the hospital; Martha and her peers come of age at the beginning of World War II.   The first four novels are set in Africa; the last in London.  Lessing grew up in Southern Rhodesia and then moved to London, and the series is autobiographical.

Martha is a rebel.  In the first novel, Martha Quest, she escapes her parents’ farm and begins to live on her own.

A Proper Marriage opens after 19-year-old Martha has impulsively married Doug Knowell, a cheerful man who represents everything bourgeois she has stood against, a man who likes to party.  They go to sundowner parties and dances every night.  There is much looking in the mirror: her friend Stella likes what she sees; Martha, who is getting fat, does not.  She is cross, does not know why she married, did not even have a wedding night, because their drunken friends pursued them on their honeymoon.  Annoyed with herself, she goes to her Communist friend’s commune and asks him to let her live there.  She goes home and decides wryly she had done the predictable thing a woman does after her marriage:  tried to escape.  She and her friends, Stella (whom she does not like), and Alice, a nurse, chat about abortions.  Martha assumes she would have an abortion.  But when Martha discovers she is pregnant, and probably was pregnant when she married,  she suddenly goes into baby-clothes-making mode, as does her friend Alice.  It has solved her life (she thinks).  Only for a short time, though.

As Martha’s father says, he supposes in this mad world that it doesn’t matter much if one girl ruins her life.

Her mother, on the other hand, who gave up her nursing profession to live on a poor miserable African farm, is delighted that Martha, whom she has always disliked, is trapped.

Martha thinks about marriage a lot.  “The situation was, as she jauntily and bleakly put it, unsatisfactory.”
And so she turns to literature and psychology.  She kneels in front of her bookshelves.

Words.  There must surely be some pattern of words which would neatly and safely cage what she felt–isolate her emotions so that she could look at them from the outside.  For she was of the generation who, having found nothing in religion, had formed themselves by literature.

How many of us have felt this, even though we are not of Lessing’s generation?

It is an amazing novel, much better than I’d remembered.  Lessing really comes into her own with the fourth and fifth books, Landlocked and The Four-Gated City,  which she wrote after her experimental novel, The Golden Notebook.   She wrote the Children of Violence series over two decades, Martha Quest (1952), A Proper Marriage (1954), A Ripple from the Storm (1958), Landlocked (1965), and The Four-Gated City (1969).

It is a stunning series.  I’ll be blogging periodically about my rereading.