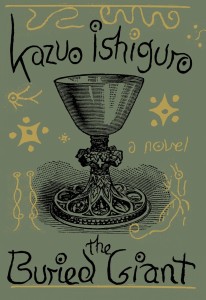 I have been long been a fan of Kazuo Ishiguro, the author of the Booker Prize-winning The Remains of the Day.   His latest novel, The Buried Giant, is another masterpiece. Set in a post-Arthurian mythic world, this literary novel is elegantly crafted and emotionally disturbing.  Oddly, it has generated controversy among science fiction fans and the writer Ursula K. Le Guin.

Ishiguro’s poetic, rhythmic narrative slowly unfolds in the shadowy reality of a post-war England inhabited by Britons and Saxons in a mist of forgetfulness  They cannot remember what happened yesterday in their villages, let alone during the wars in King Arthur’s time.. They barely remember who they are.

Important questions are asked about memory and forgetfulness.  Is it better to remember painful things, or to forget?

The two main characters, an elderly couple, Axl and Beatrice, are regularly taunted by the villagers for being slow and denied a candle because they are so old.  Axl cannot quite remember the past. He and Beatrice have separate memories.   He cannot remember even if they had children.  Beatrice remembers a son.

You may wonder why Axl did not turn to his fellow villagers for assistance in recalling the past, but this was not as easy as you might suppose.  For in this community the past was rarely discussed.  I do not mean that it was taboo.  I mean that it had somehow faded into a mist as dense as that which hung over the marshes.  It simply did not occur to these villagers to think about the past–even the recent one.

Axl and Beatrice decide to leave their village (and no wonder!  what a ghastly place) and travel to visit their son.  On the journey, they meet a woman who has been separated from her husband by a tricky boatman (i.e., like Charon, who rows the dead to the Underworld) .  The boatman rowed her husband across to the island of the dead, promising falsely he would take her next. She does what she can to torment the boatman, because she wants to be with her husband.  Later, Ishiguro brings us back to this episode.

On their journey, they meet a Saxon warrior, Wistan, who has saved a child kidnapped by ogres.  The child, Edwin, now has terrible bites on his chest, and the  villagers want to stone him  Are the bites by vampires?  No, they are not. But they are horrifying.

And so Wistan saves the boy and they travel with Axl and Beatrice.  They meet Gawain, the knight of Arthur, who has been trying to kill a dragon for many years..  They learn that the enchanted breath of the dragon has caused the mist of forgetfulness.  It was a spell designed by Merlin

Wistan, who wants to kill the dragon, too, does not trust Gawain.  The two are almost equal as warriors.  Gawain tries to discourage Wistan.   Both think they recoginize Axl from the past.  Eventually Axl himself has vague memories of a battlefield.

There are some truly eerie scenes.  Monks want to kill them, but they find their way through a tunnel built over human bones while Wistan fights a whole army single-handed in a terrifying tower..

When we learn that Gawain wants to save the enchanted dragon for some reasons we cannot altogether reject, we listen.  We know we are heading toward tragedy.  Is it indeed dangerous to remember so much?   And is remembering worth the price?  There is a price.

Most reviewers recount the whole plot of the novel, and usually I tell more, but I do think most of this depends on surprise.  SO READ THE REVIEWS LATER!

The novel has been controversial.  There have been  misunderstandings about genre.  Ursula K. Le Guin, the great science fiction writer who has grown increasingly querulous in recent years about literary trends (and many, many other things),  labels Ishiguro’s novel a fantasy, and does not think it is a good one.  (It’s not a fantasy, so what can I say?)

At my public library Ishiguro’s novel has categorized as science fiction, and, yes, is on the new science fiction shelves.  Mind you, this is not a national trend:  Barnes and Noble (and probably everyone else)  knows it belongs in the literature section.  But  fewer readers at my library will stumble across the book in the SF ghetto.

Ishiguro himself has said he does not consider it fantasy. He said in an interview with the New York Times in March that this novel about memory was inspired partly by the medieval poem, Sir Gawain and the Green Knight.  Ishiguro says,

I don’t know what’s going to happen.  Will readers follow me into this? Will they understand what I’m trying to do, or will they be prejudiced against the surface elements? Are they going to say this is fantasy?”

What can I say?  I loved the book.  And it is not science fiction/fantasy, though I love genre fiction.  It is not swords and sorcery, nor Arthur and Merlin.  No one but Ishiguro could have written it.