It remains essentially a work of the closed imagination, in which a world parallel to our own is presented in almost paraoniac denseness of detail.”–Anthony Burgess,  Introduction to Overlook edition of Mervyn Peake’s Titus Groan 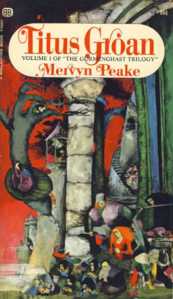 1. Brew pot of Darjeeling so you can concentrate on finishing Titus Groan before book club tonight!

2. Take notes in cute new notebook.  You chose the book, and must be prepared to drone on in awkward silences.

a. A great modernist masterpiece, but is it fantasy???
b.  Portrait of decadent inert civilization, but not an allegory.

3. Cat chews cover of your vintage ’60s paperback while you fetch your pink post-its. (You feel more important when you mark pages with post-its.) Reward cat’s bad behavior with snack so she will let you read Titus Groan.

4. Find your other used copy of Titus Groan, which is as yet unchewed by cat. 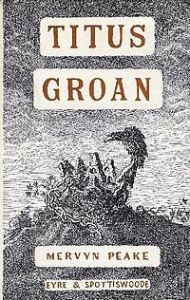 5.  Your cousin calls to say she on her way over with two venti Starbucks coffees so you can zip through Titus Groan.

7.  She announces that Titus Groan is not available on Kindle Unlimited.  (Alas!)  But there is a great Clinique sale at Younkers!

8.  You tell her you have to read Titus Groan, and doesn’t she have a lot of Clinique? (“You can never have too much Clinique.”)  You tell her about the time you were hypnotized by ads in Cosmopolitan, bought $50 of Clinique, and discovered you were allergic to makeup.

9. You  say  you must stay home and finish Titus Groan , but she points out you have already read it.

10. You explain you haven’t read it since that vacation years ago in a fishing lodge in Wisconsin.  (I didn’t fish!  The lights went out!  Scary guys with cross-bows!  The fish museum!  I mostly stayed inside and read.)  Anyway, I’m an A- personality and must finish it.

12. You  point out that B+ is a very good grade, and they’re not losers. The Game of Thrones fan with the braided beard is the only definitely odd one.

15.  She wonders if Mervyn Peake was gay.

16.  She looks him up online and discovers he was married and decides he was “moderately cute” in a “terrifying English way.” (He looks like one of his caricatures.)   But we are impressed when we learn he won the Heinemann Prize for Literature for Gormenghast and The Glassblowers. 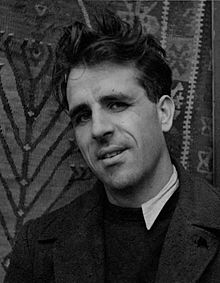 17.  Finally we go to Younkers and come home with two sweaters for the upcoming trip to Europe.  We have another Venti Starbucks coffee.

18. You had 10 pages left to read, but nobody noticed because they spent most of the time deciding what to read next.  Another night at Book Group!

P.S..  I just finished Titus Groan a few minutes ago, and it is the best fantasy/non-fantasy novel of the twentieth century.  It is arguably one of the best modernist novels of the 20th century.  And, joy oh joy,  it is the first of a trilogy!