On Sunday night I wrote about Bryan Doerries’s All That You’ve Seen Here Is God:  New Versions of Sophocles and Aeschylus.

Readership of that post was sparse. Disappointing, because my background is in classics.

And so I had “book blog” burnout. Fortunately, I am inspired again by Lawrence Durrell, that underrated writer of gorgeous modernist fiction. 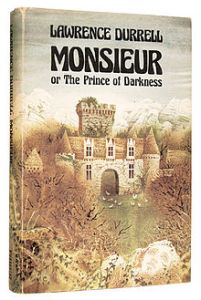 Lawrence Durrell’s Monsieur, the first volume in the Avignon Quintet, is a stunning metafictional novel.  Like Durrell’s masterpiece, The Alexandria Quartet, it plays with linked narratives from multiple points of view.  Durrell’s labyrinthine prose reflects the tortuous relationships between the eccentric, fiercely individualistic characters.  What is real?  What is invented by the novelist?

We do not care what is real, because the writing is luminous.

The relationships are complicated, as always in Durrell.  Durrell knows that the novelist is a trickster:  there are twists and surprises.  Who is the narrator?  It seems to be Bruce Drexel,  a doctor who has traveled on a train from Paris to Provence where his best friend committed suicide.  Bruce remembers his arrival at  dawn, and discovers “the Bruce that I was, and the Bruce I become as I jot down these words…”

The telegram which had summoned me southward from Prague was suitably laconic.  It told me of the suicide of my oldest and best friend, Piers de Nogaret; more than friend indeed, for his sister Sylvie was my wife, though the telegram was signed not by her but by the family notary.

And then Durrell switches to the third person, and we see Bruce from a novelist’s point of view.  In the next sentence he switches back to the first person.

He must be trying to objectify his thoughts and emotions by treating them as one would in a novel, but it didn’t really work.  As a matter of fact, in Rob Sutcliffe’s famous novel about us all, things began in exactly this way.

Who is the narrator?

Bruce reveals that their lives have been disturbingly described in their friend Rob Sutcliffe’s bitter novel about their strange relationships.  And, yes, Durrell includes many excerpts from Sutcliffe’s diaries and his novel. Who is the narrator? we ask again.

The five main characters are wildly unconventional.  Piers was Bruce’s lover; Bruce’s mad wife, Sylvie, was Piers’s sister, and is now in an asylum.  Poor Sylvie was the last one to see Piers alive.  And Rob, the eerily far-seeing novelist, has been married unhappily to Bruce’s lesbian sister.  Then there’s Toby, a historian obsessed with the Templar Knights.

Durrell meanders, but his style is elegant and poetic.  We read him for style.  This novel is fascinating.  The five characters, especially Piers, are involved with a cult of Gnostcism. There are beautiful descriptions of their trip to the desert in Egypt, where they are introduced to the rituals by Akkad, a trickster who compels them to question everything.

The historian Toby’s research into the medieval Knight Templars circles back to Gnosticism, a subject Durrell also treated in Balthazar, the second novel in The Alexandria Quartet.

And in the final section we spend time with another novelist, Blanford, and everything we know is thrown into question.