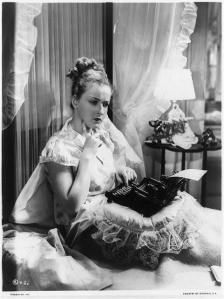 But is it still fun, we ask ourselves?

Writing about MasterChef is fun.

Writing about Fashion is Spinach is fun.

Wrriting about great literature is not always fun.

Time is precious. It goes very fast.  As Ian McEwan wrote in The Guardian when he was 64, “If I’m lucky, I might have 20 good reading years left.”   Having recently had a big birthday, I know what he means.

I hate to lose my spark, so today am entertaining myself with a short piece on filthy jokes in Aristophanes.

When Michael Stipe, the lead singer of R.E.M., listed Four Plays by Aristophanes, translated by William Arrowsmith, in The New York Times as one of his 10 favorite books, I was delighted.  One for the classics! 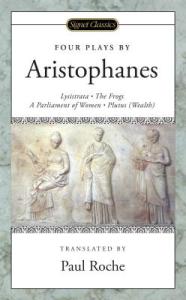 Many years ago, I fell in love with Aristophanes’ poetic comedies in a Greek seminar. His most accessible comedy is Lysistrata, a hilarious anti-war play.  But his masterpiece, The Frogs, requires a little background  (a short introduction should do it).    The Frogs is a rollicking slapstick comedy, but it is also riddled with fierce literary criticism.

In The Frogs, Dionysus, the god of wine, also associated with Greek tragedies, is disgusted with “modern” trends in playwriting.  There is no poet above ground, Dionysus says, who can write good tragedy anymore.  And so he descends to the underworld with his slave Xanthias to bring back the tragedian he calls a “clever rogue,” Euripides.

And the filthy jokes frequently need a gloss.

I recently reread The Frogs in Greek.  Translating the jokes can be very difficult.

Dionysus and Xanthias are on the road, and Xanthias is in charge of the baggage.  Dionysus is telling him which stock jokes on the subject of baggage he cannot endure,

In the notes of the W. B. Stanford edition of the Greek text, he translates a joke Dionysus objects to as: “[Saying] as you change over your carrying pole that you want to ease yourself.”

Stanford goes on to explain that slaves carried baggage on the end of a short pole resting on their bladder.

Actually, I’m not sure if it’s urinating or defecating.  The definition of the verb in Liddell and Scott’s dictionary is “ease yourself” or “drop dung.”

I’m trying to visualize this as I read Xanthias’s answer, which is another bad joke:  “Not even [the joke] that I’ll burst out from carrying so big a load, if someone does not relieve me, and that I’ll break wind?”

The jokes about loads, defecation, and farting are even ruder than on HBO.

But one suspects the jokes are much filthier than the dictionary lets on.  The scholarly dictionary by Liddell and Scott, published in the nineteenth century and still used by scholars, often substitutes circumlocutions for risque words.  So trying to untangle what is happening in the jokes can be arduous.

I have  always very much enjoyed Moses Hadas’s snappy translation (1962).  He translates the two lines above as:

Dionysus:  To shift your load, and say that you are pooped?

Xanthias:  Or, if nobody will relieve the strain, I’m going to ‘relieve myself’?

Paul Roche’s 2004 translation is more explicit. His version of the lines above:

Dionysius:  About your having to shift your pack and have a crap.

Xanthias:  What the heck!  I can say, surely, that if somebody doesn’t come and help, my bottom’s going to let out a yelp.

It is actually much funnier after you get past the bad jokes on the first page.  I am sure that if we were in the audience we’d be laughing hysterically.  We wouldn’t need footnotes.

I do not have access to scholarly articles or books on Aristophanes’s jokes, but it is fascinating to translate the Greek oneself, and then look at the English translations.  Writing Aristophanes in English is hard work!

4 thoughts on “Filthy Jokes in Aristophanes’ The Frogs”