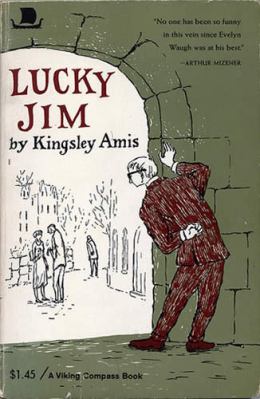 I chortled as I reread Lucky Jim.

In Kingsley Amis’s brilliant academic satire, a novel I have loved since my college days, the hero, Jim Dixon, teaches medieval history at a provincial university.   He has no interest in his subject, makes faces behind the back of the department chair, steals a taxi from one of the more genial professors, and is aware of the absurdity of an article he is trying to publish, which has the farcical title, ” The economic influence of the developments in shipbuilding techniques, 1450 to 1485.”

I reread Lucky Jim for a peculiar reason: Patricia Meyer Spacks trashed it in her fascinating book, On Rereading. 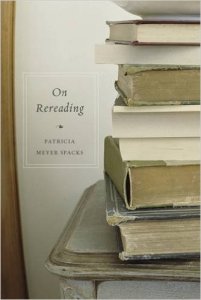 Spacks’s vigorous, opinionated book is worth a look for the brilliant essay on Jane Austen’s Emma, but her readings of many twentieth-century novels are conservative.  Yes, she likes P. G. Wodehouse, but she dismisses Doris Lessing’s The Golden Notebook as anti-male, hates J. D. Salinger’s classic, Catcher in the Rye, and deems Lucky Jim unfunny.  These three novels all challenge the assumptions of a capitalist society.

I’m wondering if Spacks so disliked Lucky Jim because it ridicules her profession.  She is the Edgar Shannon Professor of English Emerita at the University of Virginia.

Amis’s entire novel is hysterically funny, but I especially like the scenes at the department chair Professor Welch’s arty weekend. They are expected to sing part-songs and madrigals, read a French play aloud (Jim has an odd accent), and watch a demonstration of sword-dance steps.

Although the other participants sing along jovially, Jim is unhappy.

Dixon ran his eyes along the lines of black dots, which seemed to go up and down a good deal, and was able to assure himself that everyone was going to have to sing all the time.  He’d had a bad setback twenty minutes ago in some Brahms rubbish which began with some ten seconds of unsupported tenor–more accurately, of unsupported Goldsmith, who’d twice dried up in face of a tricky interval and left him opening and shutting his mouth in silence….  Why hadn’t they had the decency to ask him if he wanted to join in, instead of driving him up on to this platform arrangement and forcing sheets of paper into his hand.

Jim escapes to the pub after a quarrel with Welch’s son, Bernard, a pompous artist. He is drunk when he returns.

I  had a similar, though less traumatic, experience as a young woman.  I was invited (I hope kindly) to a sophisticated colleague’s party.  We stood around the piano singing Gilbert and Sullivan.  It was a nightmare.

I can’t sing.  I grew up on the Beatles and the Grateful Dead. Not a single Gilbert and Sullivan record in the house.  Nope.   I drank three imported beers.  This was frowned upon.  Perhaps those three beers were for the entire party!

It is not just Amis’s satire of academia that amuses me, but Jim’s alienation of those with control over his teaching contract.  Most of us have had jobs we don’t care for.  I wonder from Spacks’s criticism if we are allowed to admit this anymore.

And then there is the episode of the burnt sheets.

After Jim returns from the pub, he falls asleep while smoking.  When he awakes, he finds  he has burned holes in Mrs. Welch’s sheets, the blanket, the rug, and a table.  He cuts the holes into rectangles.  Despairingly, he shows the damage to Bertrand’s girlfriend, Christine, who laughs as she helps him smuggle the table into a storeroom.

Will Jim’s contract be renewed?

Such a charming, hilarious book!

8 thoughts on “Kingsley Amis’s Lucky Jim: Is It Funny?”