Should Jackie Collins books be displayed at the library?

My cousin the librarian is in-your-face pop culture, as modern librarians tend to be.   She recently created a Jackie Collins display at the branch library.  I do not think the library should display Jackie Collins’ books, though I am sorry Collins died.  “How about a nice dead E. L. Doctorow display?”

“Why not Dickens?” She says I need a reality check because Jackie Collins fans check out more books than “litter-arrrry” readers.

A recent survey of my bookshelves did not reassure her that I am not too bookish. “No, no, no! Long ago discarded!”  she teases me about Gilbert Highet, Christopher Isherwood, and Pamela Hansford Johnson.  “No thinking woman clutters up her house with such rubbish.” 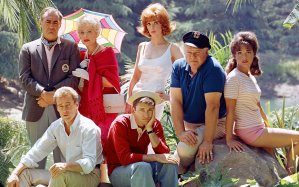 Today, because of the desert island mention, she insisted we have a “Gilligan’s Island” marathon (it’s about castaways).    After three episodes, we gave up (the show is very dated) decided to make Desert Island Lit Lists.

Phyllis Whitney’s Listen for the Whisperer  (well-written romantic suspense).  The plot:  After her father’s death, Leigh goes to Norway to find the movie star mother she never knew, who  is being stalked by a murderer.   Suspense-full!

Colleen McCullough’s The Thorn Birds.  Set on a sheep station!  Romance with a priest!  Made into a miniseries!

Dorothy Sayers’s Five Red Herrings.   It’s a Peter Wimsey mystery.  A hilariously fiery artist is murdered.   And there’s a pub in it.  And there’s a bicycle in it.  WHO SAYS I’M NOT POP?

Tolstoy’s War and Peace.  It’s very long, but I absolutely love it.  Sleighs, skating, dressing up, balls, bears strapped to policemen’s backs, travel, war: it has everything.  It is a page-turner.  I mean this.  WHO SAYS I’M NOT POP?

Ursula K. Le Guin’s The Dispossessed.  Nancy kindly sent me a copy of this. Le Guin is one of the best American SF writers.  Online reviewers sat this dystopian novel is reminiscent of Brave New World.

Poems of Catullus (Latin).  These lyric poems are lovely, entertaining, extremely modern, and mostly short.  Every reader of Roman poetry knows his love poems about his unfaithful girlfriend Lesbia, who is thought to be based on a promiscuous older woman, Clodia Metelli, though I personally do not read these as autobiography.    I love his elegy to Lesbia’s dead pet sparrow, and invectives against Caesar, Cicero, and others.

I’D LOVE TO KNOW YOUR DESERT ISLAND LIT BOOKS.  What island will you go to???

6 thoughts on “Our Desert Island Lit Lists, or Who Says I’m Not Pop?”