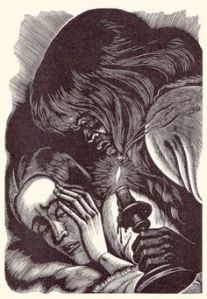 Doctor Shopaholic’s Notes:  Ms. Mirabile is a compulsive book shopper.  She bizarrely admits to spending her vacation in London bookstores. Could have gone to theater, concerts, and museums.  Spent one day reading The Oresteia in her hotel room.    Is not sure how much she spent on books: it adds up differently every time. Her math is terrible!  Her receipts are a mess!

Prescription:  Get that woman a Kindle!

I have an e-reader!  And a new shopping journal, a pretty notebook I bought at Paperchase in London.

Yup.  Buying a new notebook means I will shop less.

When will this madness end?

Who knows if I will ever get to London again?   I went to all my favorite bookshops and bought a number of books. I also discovered the fancy little bookshops on a lane off Charing Cross Road, Cecil Court. Most of them were a little rich for my blood, but I browsed at Stephen Poole Fine Books, which specializes in first-editions of 20th century literature.  A collection of Rumer Godden’s short stories tempted me, but it was pricey.   Maybe next visit.

But here’s why I really have to cut back.

I went to Barnes and Noble yesterday.

Heavens, what did I need at a bookstore?

I went to B&N to see what they are promoting this week .  Oddly, they are not making a big deal of the tenth-year anniversary edition of Twilight, or George R. R. Martin’s new novella.  I had predicted they would. They’re in the best-seller section, but not prominently displayed.  In the literature section I found Faith Sullivan’s Good Night, Mr.  Wodehouse, published by the small press Milkweed Press.  And I am looking forward to reading Joy Williams’ new collection of short stories.

But steady on!  Not right now.

What would Jane Eyre do, I ask myself.

In London I discovered my inner Jane Eyre.

At the British Library, I saw the manuscript of Jane Eyre  on display in a glass case.  And Branwell’s portrait of the Bronte sisters is  at the National Portrait Gallery.

Why do we love the Brontes so much?  Why especially Charlotte?

A.  We’re all plain Jane Eyres compared to the buxom Blanche Ingram, whom Rochester rejects.

B.  We all want Mr. Rochester to choose us.  And he will, because he chooses Jane.

C.  Then in middle age, we identify with Bertha Mason, the mad wife in the attic.  Depending on the way we read her, she can be life-affirming, too.  (See Jean Rhys’s Wide Sargasso Sea, a retelling of Bertha’s story.)

There is a scene in Jane Eyre when Bertha discovers her inner Jane Eyre.

Jane wakes up from a dream and sees Bertha, a monstrous woman with a purple face, standing in front of the mirror trying on Jane’s wedding veil. Jane is terrified.  She has never seen Bertha before.  She didn’t know she existed. Bertha takes off the veil and tramples it.  Then she takes a closer look at Jane, who pretends to be sleeping.

“It drew aside the window-curtain and looked out; perhaps it saw dawn approaching, for, taking the candle, it retreated to the door.  Just at my bedside, the figure stopped:  the fiery eyes glared upon me–she thrust up her candle close to my face, and extinguished it under my eyes.  I was aware her lurid visage flamed over mine, and I lost consciousness:  for the second time in my life–only the second time–I became sensible from terror.”

It is a Janus-like scene:  two faces of the same god.   Bertha sees her own past self when she tries on the veil and sees Jane on the eve of her wedding. Surely she has escaped from the attic because she knows of the wedding.   And Jane sees her own future:  or it could be, if she married Mr. Rochester before he is “castrated.”

And I have made a new plan for book-buying rehab.

Will I carry through with this?  We’ll see.

12 thoughts on “Re: Book-Buying Rehab”