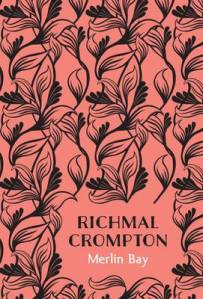 In 2008 at The Guardian, Rachel Cooke wrote a lovely essay about the 30th anniversary of Virago.  She became a fan of the trademark green books when at 17  she discovered Stevie Smith’s novels.  She went on to read other neglected Virago writers,  including Miles Franklin, Sylvia Ashton Warner, Elizabeth Taylor, and Rosamund Lehmann.

But there was a point below which Carmen and her colleagues would not go: they referred to this as ‘the Whipple line’, after Dorothy Whipple, a writer of popular fiction in the Thirties and Forties. (Whipple does, however, have her fans; she is now published by Persephone, which also revives out-of-print work by women.)

I wonder if Persephone fans were upset by the Whipple line.  I  have very much enjoyed Whipple’s novels, though they are what I call middlebrow.  And so  I would draw a different line: the Richmal Crompton line!

Bello has recently reissued Richmal Crompton’s books, which I discovered  when I looked up Pamela Hansford Johnson (not available in the U.S. from Bello, for some reason).  Crompton wrote 38 books for adults.  Maybe I’ll get hooked, I thought.

And I am hooked!  I very much enjoyed Merlin Bay (1939), a novel about an ordinary family who spend their vacation together in Merlin Bay in Cornwall.  Crompton grapples with the limited affections and understanding of a group of far-flung relatives.  During the trip, they forge or renew difficult relationships.

It opens with the musings of Mrs. Paget, who  spent her honeymoon years ago in Merlin Bay.  She regrets having silenced her late husband when he tried to confide bout his past in Merlin Bay:  she could not bear to know too much.  Now she hopes to learn his secrets.  She travels with her daughter, Florence,  a nervous spinster who believes her purpose in life is to take care of her mother.   (Mrs. Paget finds her wearisome).  They will stay at a hotel near the overcrowded house of Pen, once Mrs. Paget’s most promising child, now a housewife who lives at Merlin Bay year-round and is unhealthily  absorbed in her six children:  she left her husband in London on the pretext of their daughter Rosemary’s health. Last but not least is Mrs. Paget’s son, Martin, who has lived in Malay for years and  hopes to find a wife in England.

I am delighted by Crompton’s portrayal of the honesty of old age.  Mrs. Paget is not looking forward to spending time with her children.

Her own three–Florence, Martin, Pen–had been delightful as babies, but she had to admit that they meant very little to her now.  It isn’t that I’m not fond of them, she assured herself hastily.  I’d do anything in the world for them (at least I think I would), but I don’t really love them.  They’ve grown up so dull….

We do not spend much time with Mrs. Paget, though.  Crompton  frequently changes point of view so that we get to know all the family members, including the grandchildren.  Her daughters Florence and Pen, who seem as different as night and day, somehow cannot bear to look reality in the face.  Florence feels inferior to everyone.  She especially looks up to her friend Violet, an arrogant middle-aged teacher who hopes to entice Martin into marriage and who is staying with them at the hotel. When they look at a view,

Florence preserved a respectful silence.  She liked a nice view herself, but she knew that her feeling was not to be compared with Violet’s.  Violet was quoting poetry now in a deep tremulous voice….

Pen is angry about the intrusion of family in her perfect life. She even hates it that her husband is on the way from London.  She is especially annoyed by Violet.

What was the name of that friend of Florence’s?  Violet Something-or-other.  She remembered that she’d disliked her intensely the only time she’d met her.  She always disliked those charming middle-aged unmarried Women…Pen knew all about schoolmistresses.  Just sitting at a desk for a few hours in the morning and looking on at games in the afternoon….  She’d like them to try her job for a day or two–on her feet and hard at it from first thing in the morning to last thing at night.

We get the feeling that Pen resents Violet because she could have been Violet.  Instead, she’s a wife and mother.

I so much enjoyed this fast-paced, engrossing novel.  Mind you, it is not a great novel, but it is entertaining and fairly well-written.   Crompton writes simply, focusing on plot  and characterization.  Story trumps style.  It is dramatic and a bit soapy.  But it is more than a domestic novel.  She understands the gamut of human emotions, from kindness to compassion,  malice to rage.

I look forward to reading more Crompton, though I haven’t the faintest idea where to begin.