Thanksgiving is my favorite holiday. If you’re lucky, you persuade your husband to splurge on a big organic turkey, you make your side dishes in advance, and you sign up all your relatives to volunteer at the Free Thanksgiving Dinner at your church. (They will eat your dinner later.)   Now you can read in the kitchen while you occasionally baste the turkey or stir something on the stove.

But a hostess’s books are the trick for surviving even a quiet holiday. Depending on the hectic-0-meter of the holiday, the hostess will need to dive into  (1) the Dumpster of Trash Reads, (2) the Sanctuary of the  Middlebrow Novel or (3)  a Critically-Acclaimed Possible-Classic to  impress OCD parents who denied you the Nancy Drew books. 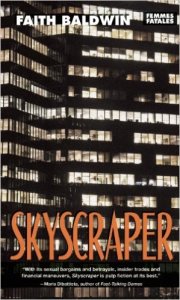 CATEGORY ONE:  TRASHY BUT FUN.  If your sister’s dog eats your favorite sweater, there is no question. You need trash.

On my Trash TBR Pile:

Faith Baldwin’s Skyscraper (the Feminist Press:  Femmes Fatales Women Write Pulp).    Wow, does this ever look trashy!  Trashy in a good way.  Published in 1931, it is the story of a career woman, Lynn Harding, a doctor’s daughter who drops out of college because her father can no longer afford the tuition. She moves to  New York City and  loves her office job in a skyscraper, but her boss says she’ll fire anyone who has a working husband.  Laura Hapke writes in the Afterword:  “Beyond the saga of Lynn’s love affairs, what matters is that she can support herself.  In that, she is representative of the one-quarter of women who worked as wage earners, many the sole supports of their families.  Also fairly typical for the time is that Lynn, as the fiancée of a low-level financial analyst, risks losing her job.”

“Sure, I mean it.  Personally I’d respect her more if she was paying for whatever influence this bird may have, instead of taking it and giving him a lot of hope that doesn’t mean a damn.  I like to pay on the nail.”

The writing is not what I’d call good, but historically it gives you an idea of the kind of office romance that was published in the Depression.

CATEGORY TWO:  MIDDLEBROW AND FUN.   Sometimes we don’t want to read anything too deep because of the constant interruptions on the holiday.

ON MY MIDDLEBROW TBR PILE. 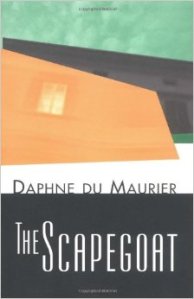 Daphne du Maurier’s The Scapegoat.  Du Maurier is best known for Rebecca, her Gothic classic, but in recent years feminists  have revived interest in her other books.  The others are solidly middlebrow, in my opinion, but they are entertaining.  The jacket copy of my University of Pennsylvania edition  says, “Two men–one English, the other French–meet by chance in a provincial railroad station and are astonished that they are so much alike that they could easily pass for each other.”  They drink together, and the  next day John wakes up and finds the Frenchman has stolen his identity,.  He takes the Frenchman’s place at the chateau and…. solves the mystery, I imagine! 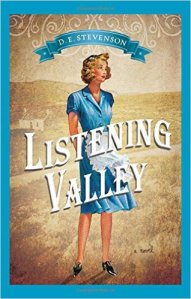 D. E. Stevenson’s Listening Valley.  I love D. E. Stevenson’s gentle comedies and romances.  According to the jacket copy on the Sourcebooks paperback, the heroine Tonia moves to London from Scotland at the  beginning of World War II, but a tragedy sends her home to Scotland.  This novel was published in 1944, and  reflects the horrors of war, as well as Tonia’s interrupted romance.

CATEGORY THREE:  CRITICALLY-ACCLAIMED POSSIBLE CLASSICS.  If you have no anxiety about the day or have some quiet time, you can read something more demanding.

ON MY CRITICALLY-ACCLAIMED PILE: 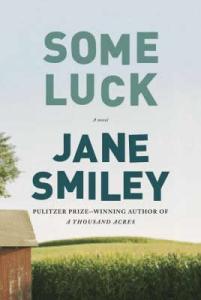 Jane Smiley’s Some Luck.  The first in a trilogy, this novel covers three decades in the life of an Iowa family, from 1920 to the 1950s.  The trilogy has been well-reviewed, and all three of the books have been published this year.  Perhaps now’s the time to read it. 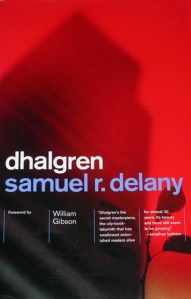 Samuel R. Delany’s Dhalgren.  This post-modern SF classic is experimental, disturbing, and difficult.  Set in Bellona, a strange city that has survived an unspecified catastrophe, Dhalgren is the story of Kid, a poet hero who does not remember his name,  and who wears only one sandal. All kinds of people live there:  hippies who share what they have,a  middle-class family trying to hold on to a middle-class life in a skyscraper now  inhabited by squatters, a wealthy man who still occupies a mansion, and gangs of thugs .

William Gibson in the foreword writes,

…[it] is a prose-city, a labyrinth, a vast construct the reader learns to enter by any one of a multiplicity of doors.  Once established in memory, it comes to have the feel of a climate, a season….It is a work of sustained conceptual daring, executed by the most remarkable prose stylist to have emerged from the culture of American science fiction.

I hope your holiday reading will be as good as mine!