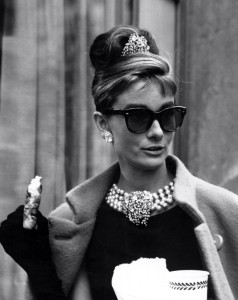 It is not that my father has dementia.  It’s that I’ve grown older.  My hair is wild and completely white.

“You look good” is what we women deserve.  We are not Holly Golightly and we don’t breakfast at Tiffany’s.  A few years ago, my family gathered at a small-town cafe, the kind that serves chicken-fried steak and homemade pie. We all had the special (chicken-fried steak) except a second cousin I barely know. He bizarrely told me, “You could be on The Biggest Loser.”

My dad laughed and sneered.

So that’s what you really think of me, I thought calmly.  Here they were, two older men, not prizes themselves, and they thought they could judge me on my weight.  “That’s enough,” I said.

Ten years ago I gained a LOT of weight after being prescribed a medication.  So go ahead, judge me.

Women are judged on their looks, whether they are thin or fat, young or old.  Take Carrie Fisher, age 59.   Since appearing as General Leia Organa in Star Wars: The Force Awakens, she has been under fire for her looks.  Here’s what I want to know:  what’s wrong with them? 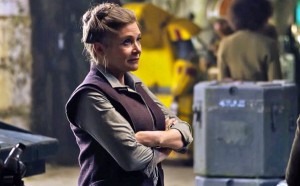 She lost 30 pounds for the film. If she hadn’t, think what they’d say.  In an interview with Good Housekeeping, she said, “They don’t want to hire all of me — only about three-quarters!  Nothing changes, it’s an appearance-driven thing. I’m in a business where the only thing that matters is weight and appearance. That is so messed up. They might as well say get younger, because that’s how easy it is.”

And then Kyle Smith, a New York Post columnist, attacked her for complaining about the weight loss.  He said it was a health thing.  Uh huh.  That’s what the studio wanted.  Health.  (Yup, take away my med with weight gain side effect, and you’ll see health–ha.)

No one would know the name Carrie Fisher if it weren’t for her ability to leverage her looks. George Lucas only cast her in the first place because she was young, slim and cute at the time. (She turned out to be a talented writer as well, but it’s an open question whether the second career would ever have gotten off the launch pad without the fuel provided by her first. Mostly she has written about what it’s like to be Carrie Fisher.)

Good God, that’s so creepily sexist! If you don’t like Star Wars, try Hannah and Her Sisters. I am a Star Wars fan, but  I wouldn’t have bothered with the enjoyable new film if not for Fisher and Harrison Ford.  It is fun, fast-paced, and clever, almost as good as the originals, and Carrie Fisher and Harrison Ford are charming in their interactions with the new generation of actors.  I only wish Fisher had a bigger role.  (Maybe next time.)

Ok, I quit acting. NOW,can I not like being judged for my looks?Tell me what to do & who to be, oh wise New York post columnist.u GENIUS

That reminds me. It might be time to reread Fisher’s remarkable novel, The Best Awful, a sequel to Postcards from the Edge.  It is brilliant, hilarious and grimly truthful in its portrayal of addiction and madness. When  Suzanne’s husband, a Hollywood studio executive,  reveals he is gay and leaves her for a man, she decides to go off her meds. It is a tragic trip.  But it does end well eventually…