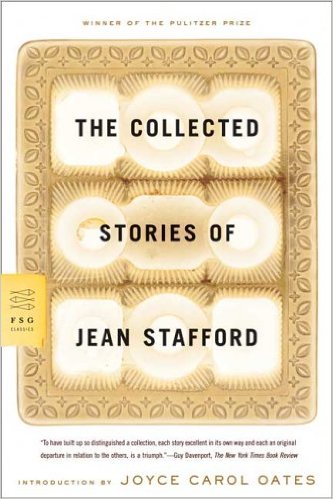 I love The New Yorker.  I always look forward to the fiction.  Stars rise and fall. I wonder whether even  publication in The New Yorker can ensure a writer’s future.

Jean Stafford is a neglected New Yorker writer.  Her books are still in print, but her name is seldom mentioned.  One of her stories, “The Interior Castle,”  was anthologized in The Best American Short Stories of the Century, edited by John Updike, but she is missing from the new anthology, 100 Years of the Best American Short Stories, edited by Lorrie Moore.  Stafford died in 1979, so  perhaps we have to skip back a few generations to find fans of Stafford.

The Collected Stories of Jean Stafford won the Pulitzer in 1970.  I love her work. I used to drink coffee and read her stories  as I sat on the bank of the Iowa River behind my (now defunct) high school. 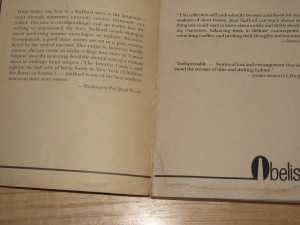 Scotch tape is the answer: the pages are loose!

Stafford’s stories are Jamesian, powerful, comical.  How can such a brilliant writer be so little-known?

The masterly stories in her Pulitzer-winning collection were published between 1944 and 1969.  It was the era of the polymath, of  a love of arcane multi-syllabic words.  These perfectly-wrought stories, set in Europe, New England, and the West, are  both subtle and shocking; her descriptions and dialogue are precise and pellucid. Does she go too far for our pseudo-sensitive smiley-face sensibilities?  Are her  New England spinsters too rich, mean,  and snobbish for the modern reader?  Is the shocking culture clash between Americans and Germans after Nuremberg  too graphic? (It is a horrifying story.) Are the pretentious teachers with new master’s degrees too condescending?  (Yes, they are, but that’s so realistic!)  Is the obese philology student in Heidelberg too monstrous:  she eats whole cakes,  uses a sucker as a bookmark, and ominously talks about a dead thin twin.  ( I’m fat, and not at all offended!)  What about the cruise captain who exaggerates his racial prejudice (or does he?) to tease a liberal young woman described as “a natural victim”?  (At the end,  she is far from a victim.)  These characters are vividly portrayed, realistic,  and are sometimes as obnoxious as people we know in “real life.”

Rereading Stafford’s stories is a delight. In the Jamesian story “Life Is No Abyss,” Lily, a young woman whose pilot parents ironically died in a plane crash, is scandalized by a visit to 80-year-old Cousin Isobel in the poorhouse.  Lily has vivid memories of Isobel and her ancient father, the Judge, entertaining the whole clan in their rich, elegant North Shore summer house.  Yhe elderly Cousin Will, described as “the worst and most ingratiating investor who had ever lived,” has ruined Cousin Isobel through bad invesments, and she insists on living in the poorhouse to get revenge.  She refuses to move into the apartment on Will’s renovated third floor, or the even more opulent apartment in rich Cousin Augusta’s house.

Cousin Isobel is hilariously, if nastily, eloquent.  She is as astute as a social worker when she desribes the conditions of the poorhouse  where she doesn’t have to live.

“The whole place is a scandal. It is a public shame.  If they would give me pen and paper–don’t ask me why they won’t, for their regulations are quite incomprehensible to my poor brain–I would write to people in high places, where I daresay the name the name Judge James Carpenter has not been forgotten.  I have never gone in for seances; I have never been taken in by the supernatural; if she telephoned me personally, I would not believe that Mary Baker Eddy was ringing up from her tomb in MOunt Auburn Cemetery.  But I swear I know that good man, the august Judge, turns in his grave when his immortal soul considers where I am.  He never liked Will Hamilton.  Small men are shifty.”  Before arthritis had shortened her, Cousin Isobel had stood six feet in military heels.

I love these stories.  My copy is starting to fall apart, though.  The cover is torn and the opening pages are loose!  I’ll have to find another copy after this reread.