How I wish I’d seen Obama and Bruce Springsteen in 2012!

The presidential candidates have descended upon us.  It’s a bit like being visited by Zeus, Athena, and the other gods.   Iowa always has the first caucuses (Feb. 1 this year). The candidates woo us for six months to a year before the caucuses: they give speeches in August at the State Fair , which I last attended in 2001  for a Bob Dylan concert, and at rallies I never hear about till afterwards. This year I missed Hillary and Katy Perry, whose music, I must admit, I do not listen to.  I also missed Lena Dunham, author of Not That Kind of Girl, campaigning for Hillary. A few year ago I missed Obama and Bruce Springsteen. So many celebrities!  But we were swept away by a Bernie commercial with a Simon and Garfunkel soundtrack: it’s like Woodstock without mud or drugs (the best kind of concert). 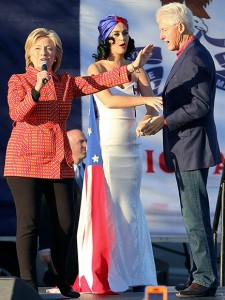 Hillary with Katy Perry and Bill.

I have not seen a politician speak live since McGovern in 1972. “I am pro-Choice and I vote,” as we used to say when I was a volunteer at NARAL (National Abortion Rights Action League), but nowadays I attend writers’ readings instead of politicians’ speeches.  I will  vote for the Democratic candidate next November, whoever it may be.   That said, we are a Hillary family.  I received my Hillary caucus guide in the mail today.  I also received a Bernie flyer and, later, found an O’Malley card slung over the door handle.

I saw five political ads during a rerun of “The Big Bang Theory.” Hillary’s are practical; Bernie is a visionary.  I can’t tell any of the Republicans apart, except Trump and Jeb, the least extreme.  There were a couple of Trump-bashing ads by the Republicans that make him look liberal by their standards and set him apart from the Christian rednecks and would-be Ku Klux Klanners.  I must admit, I burst out laughing when I saw Trump on the news at the State Fair and he said he wanted to build a wall along the Southern borders. I thought he was joking.  He was not. That said, he’s less crazy than the others.  Michael Moore says Trump does performance art. Welllllll…..

Anyway, if you’re in Iowa, this is How You Survive the Canvassing & the Caucuses.

1 Never open the door to a canvasser.  The canvassers are all impossibly beautiful and handsome but they are not like you and me:  they have been exported from the coasts to woo us. It’s hard to align Hillary and Bernie with a beautiful woman whose shade of blonde cannot be found in a salon anywhere in Iowa, but she knocked on my door and I answered because I thought it was UPS.    Botticelli’s Venus? Perhaps. In 2004 when I I answered the door to a canvasser, I ended up caucusing for Howard Dean, who became famous for the “Dean scream,” which, by the way, did not happen.  The  “scream”shown on the network news was two seconds of an ordinary speech out of context.

2. Bring your phones or tablets to the caucuses so you can play discreet online scrabble, because you will be there a while.   The caucuses are vaguely reminiscent of junior high pep rallies. They are held in school gyms, auditoriums, churches, libraries, and other sneaker-smelling public buildings.  You sign in and then  sit (or stand if there are no chairs) in your candidate’s section. There is milling and thronging, sitting idly on bleachers or folding chairs, important people trying to persuade others to change sides (sometimes a candidate is not viable, because he has too few supporters), and finally, a couple of hours later, a head count is taken of the various candidates’ supporters.  The results are tallied in all the counties, and determine the “win, show, place” positions of candidates and the number of delegates for each candidate at the convention.  It is a long process!

Rah rah rah!  I wish we had concerts instead of caucuses.  It would be so much more fun to vote for  Hillary at a Chrissy Hynde concert, or Bernie with Simon and Garfunkel, etc.  You’d get a better turnout, too.  If you’re going to be there a while, why not listen to music?

And now I want to go listen to Simon and Garfunkel’s “America.”  What a great song.